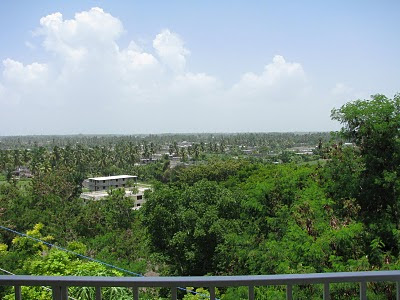 "There are two Haitis: Port-au-Prince and everything else," is a statement we hear a lot. Flying into Les Cayes, one of the passengers on the plane said, "I tell everyone that Port-au-Prince is not the real Haiti." As someone who has spent most of her time in Haiti in the capital, I had to agree that at least from the air, the Les Cayes area looked much different than Port-au-Prince. It was shockingly green, for one. And then on the ground, there aren't as many people around. Many of the roads in Les Cayes are much better than those in PAP.
The above photograph is from the balcony of the home of our friends, Tim and Joan Reinhold. They are Christian missionaries who live 10 months of the year in Haiti. They, with a lot of Haitian help, built their beautiful home by hand, which is how so many things are done in Haiti. Tim and Joan help put roofs on school and churches throughout the southern peninsula of Haiti. Teams from different Apostolic Christian churches in the United States come and aid them in their mission. Their accomplishments are very impressive.
After the earthquake, many of the Port-au-Princians headed to the provinces where they had family or friends they could stay with. But after a few months, it was time to return home, which in many cases was now a tent. The lives of the people in the provinces aren't exactly easy on a regular day and they couldn't continue to support their extended families any longer.
We have heard Gertrude's suggestion several times by our American friends in Les Cayes: that hopefully Haiti will become more decentralized after the earthquake with Port-au-Prince not having such a stranglehold on all the government functions. If there was more infrastructure and commerce in the rest of the country, people could find employment outside Port-au-Prince and the terrible crowding in the city would decrease. And then, maybe, we would speak of one Haiti instead of two.
Posted by Maria Carroll at 4:37 PM