Through A Mirror Dimly 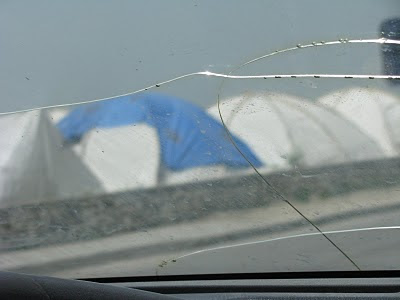 We talk to all kinds of different people when we're in Haiti, and we hear different opinions of what the problems and solutions are. One of the last nights we were in Port-au-Prince, we went out to eat with an American couple who have been in Haiti for more than 30 years and raised two children there. The man, L, owns a manufacturing business, and the woman, N, is a teacher.

We had dinner in a restaurant. Our friends had to fight a lot of Saturday night traffic on Delmas to pick us up, so we didn’t sit down to eat until about 8 pm. We asked the couple what they thought the solution was to the tent cities. We agreed that it is a difficult problem to solve. L has met with one of the camp leaders to offer employment to some of the people living in camps who qualify.

We heard from another man who runs a business and offered to help one of his employees who lives in a tent get back into a house that his employee didn't want to leave the tent because he didn't have to pay rent and he and his family received free food and medical care. Going along with this, L said that a man who sells water reported that his sales are up, despite free water being available. They decided that some people have more money to spend because, again, they aren't having to pay rent. As we think about this, we have to take into account how terribly inferior housing conditions were for the Haitians before the earthquake for them to view living in tents as not that big of a step down.
This reminds me of a statement that John made earlier in the trip. We were walking along the partially destroyed street of Delmas 31 when we heard, "Clank! Clank! Clank!" the sound of metal on metal. It was a man, whom we've dubbed the "clanking man." Prior to the earthquake, he lived in a tent below a bridge and fashioned items out of scrap metal. After the earthquake, same thing. Back then, we went into his tent and it was hot and mosquito-ridden. As we walked by him this time, John said, "You know who was affected least by the earthquake? Clanking man." His life was so awful already ("We are living in misery," he told us before) that it could hardly get worse.
But it has. A good day in Haiti, particularly Port-au-Prince, before the earthquake, was like a natural disaster. It is imperative that we understand how bad things are now that they have had a most devastating one. Hundreds of thousands of people are living in tents, which won't last long and will be inadequate when hard rains come. Poor sanitation and people living on top of each other create conditions that can breed epidemics.
I can't imagine what the environment inside the tent is like at night. We spent our last night in Port-au-Prince in a guest house. The heat and humidity were stifling, suffocating. During the night, I didn't think I was going to be able to take it, I was so uncomfortable. And then I thought about all the people sleeping, or trying to, zipped up in the tents, and I was ashamed of myself.

Posted by Maria Carroll at 5:55 PM