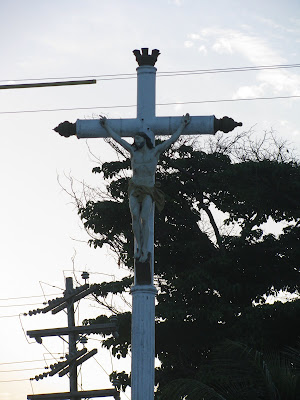 It's been remarkable to hear people's stories about where they were when the earthquake hit. Our friend L was driving home from work. As his vehicle bounced over the rutted roads, he thought, "I need to slow down." He braked but his car continued to rock back and forth. He wondered if he had a flat tire until he looked up and saw the telephone wires swaying wildly. Earthquake. When it was finished, in less than a minute, he continued his drive to his home, part way up the mountain, having no idea of the devastation.
L's wife, who teaches at a school, was home and worried about him. Their cell phones and television were out, and they didn't find out about the extent of the damage until much later. Even until today, there is no cable television in Haiti. It apparently ended with the earthquake.
L was lucky in that his factory wasn't damaged much. Donations from his business associates abroad flooded in, and he and his co-owner divided up the money between his 500 plus employees. One of his employees, Nadia, is the sister of Jackson Jean-Baptiste, a Haitian Hearts patient who died in 2006. L often gives her a ride to and from work.
When we went to supper with L and his wife, he told us about how for fun he had an American Idol-type talent competition among the workers in his factory. He was impressed with some of the singing and dancing talent and would like to have them perform at restaurants, like the one we were at.
L's wife, N, worked at the Union School, a private, American-style, college prep, English language school with grades pre-K through 12. Fortunately, the quake occurred after regular school hours and those who were still on the premises managed to get out safely. Before the earthquake, the school had an enrollment of 300 plus; months after the earthquake when the school started up again, there were only 35 students, as many left for the United States or other countries.
L & N opened their home to medical teams from the United States. For them, life has now largely returned to normal.
Posted by Maria Carroll at 9:00 PM

I have a inquiry for the webmaster/admin here at livefromhaiti.blogspot.com.

May I use part of the information from your post right above if I give a link back to your website?