Bag On the Ground 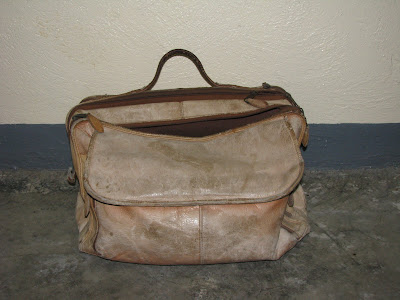 After more than three years, this blog is now true to its name, Live From Haiti, as I am typing these words from a guest house in the LaPlaine district of Port-au-Prince. Today I accompanied John to the clinic run by the Daughters of Charity. Today and yesterday were feast days (The Feast of God) so there weren’t as many children and moms at the clinic as usual; several of them were patients John had seen before, and thanks to medicine and treatment, were doing much better.

John’s doctor bag in the above photo survived the earthquake. He had stored it at the sisters, and when he came in for his first day of work on this trip, it was sitting on the chair in his exam room as if nothing had happened. Even more amazingly, one of his suitcases, which was stored at a guesthouse which collapsed during the earthquake was pulled out of the rubble.
Posted by Maria Carroll at 7:09 PM