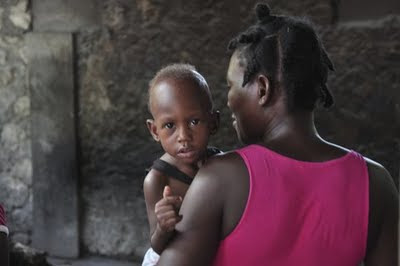 Today two patients died in the Cholera Treatment Center where John is working. With the number of patients they have had coming to the center, and the severity of the disease, it was inevitable. But still very hard and very sad.

Sometimes I feel a little inane when I send John emails about what I am doing in the States: today Luke had swimming lessons and then we went to the park; the weather has been rainy and cool; we had two deliveries from Amazon; while he is trying to keep death at bay for dozens of patients. At best, I hope my emails will provide a little needed distraction to John from the difficulties of the day.

It is a mind boggling concept to reflect upon: while many of us in the developed world go about our relatively cushy lives, people all over the world are dying in wars, from starvation, from preventable diseases. Children are abused and even sold as slaves. People are rotting and tortured, unjustly held in unknown prisons. All of this is going on at this moment.

We may shrug and give the winner's response, "That's life. It's always been that way." But why does it have to be that way? Of course, there is no avoiding suffering for any of us, but why does life have to be so horribly miserable for so many? I don't think there are satisfactory answers to this question. We've managed to construct fairer societies for hundreds of millions of people; we can create a world where everyone receives the basics.

If we want to badly enough.

Pictured above, a boy and his mother at the Cholera Treatment Center where John is working.

Posted by Maria Carroll at 11:15 PM No comments: 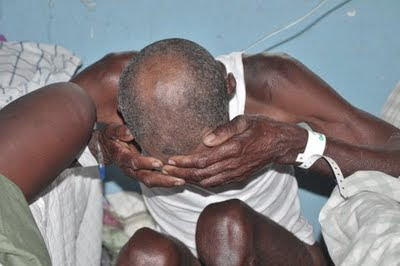 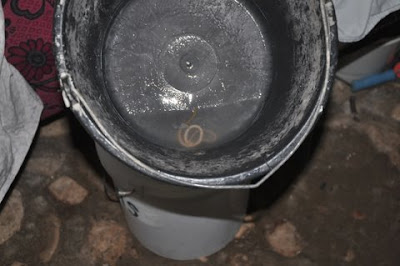 If you're from the developed world and you hear the word diarrhea, you probably think of a runny, brown substance, like liquid stool. The picture above is of a bucket containing diarrhea from a patient who has cholera. As you can see, it looks like water: hence its deadliness. Cholera, a bacterial infection, can cause copious vomiting and diarrhea. Fluids are leached from the body, severe dehydration ensues, and if untreated, death can occur within hours. Because of its watery appearance, cholera diarrhea is often referred to as "rice water."

After its initial outbreak last October, cholera is surging again in Haiti, abetted by the recent rains, which have spread the bacteria. John is currently working at a Cholera Treatment Center at Hopital Albert Schweitzer in Deschapelles Haiti, in the Artibonite Valley, where cholera was introduced to Haiti, most likely by UN troops. You can read about his work at a blog he his writing for our hometown newspaper, the Peoria Journal Star.

The good news about cholera is, though it is deadly, it is easily treated with fluids. People who are practically comatose are sitting up and talking after a couple of hours of IV fluids.

The bad news for Haitians is that cholera is often not the only health problem they are battling. In the picture above, which John took at the Cholera Treatment Center today, you can see a large, white worm that was excreted out with the fluid in the bucket. As John said, "Chronic worms and acute cholera."
Posted by Maria Carroll at 8:08 PM 1 comment:

The Doctor is In 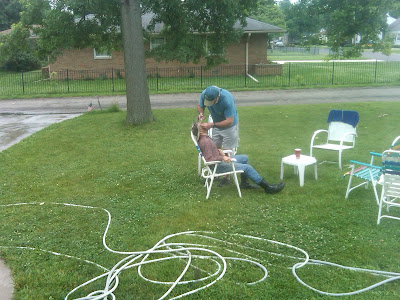 Sometimes it's easy for me to take for granted what my husband John does for all of his patients. Take Excellent, for example. He is a Haitian man in his fifities who for an unknown reason, has a large amount of fluid in the space around his heart. When John was in Haiti on his last trip, he saw Excellent and all of the fluid was making it very difficult for him to breathe. So John put a needle in Excellent's chest and drained off a lot of this fluid. This was a brave thing for John to do and a brave thing for Excellent to endure. It is no small thing to insert a needle in the chest without the benefit of xray to help guide the process. But it paid off, and Excellent was much improved. He could breath easily again, and he and his wife were very grateful to John.

This was enough in my book to qualify for amazing. But once John was home he continued to call Haiti for reports on how Excellent was doing. Unfortunately, his pericardial space was filling up with fluid once again. Now, there was no doctor in Excellent's town who was able to drain away the fluid. Even though he was in the United States, John considered Excellent his patient, and he feels an obligation to his patients. John made many phone calls and sent many emails to Florida and Port-au-Prince, and he found a clinic in the capital city with doctors willing to see Excellent and possibly drain the fluid out of his chest. John made many more calls to Haiti and arranged for a bus to transport Excellent, his wife, and an escort the five hours from his home to Port-au-Prince. And last week, Excellent was once again breathing easier because, thanks to John's advocacy and efforts and the skilled doctors at the clinic, Excellent got the fluid that is choking his breath drained from his chest.

I am very proud of John for his efforts on behalf of Excellent. It is humbling to me too, because I think of all the times I haven't gone the extra mile, or even the extra inch for someone in need. Wouldn't it be great if we all derived such passion and joy from using our talents and opportunities to serve those most in need of them? What a world it would be! Thanks John for living this lesson.

In the picture above, John removes the stitches from the forehead of a neighbor.
Posted by Maria Carroll at 10:39 PM No comments: