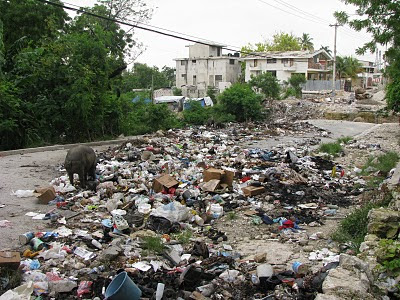 The day before yesterday, we travelled by bus from Les Cayes back to Port-au-Prince. We decided to take the bus instead of fly back because it is cheaper and we would be able to see some beautiful coastline scenery.
Departure times in Haiti are a moving target. First, our bus was going to leave at 4 am, then at 3 am and finally at 2:30 am. As John says, if you can't take a joke, don't blame Haiti. A group of hardworking gentlemen from Grand Rapids, Michigan had to get to the PAP airport to catch their flight, and they chartered the bus to take them. These men had been doing construction projects at the hospital near our guest house in Cite Lumiere. There was room for us on the bus, though, and we decided to go with them, rather than try to catch a bus later in the day when the traffic would be worse. We wouldn't be able to see the scenery but we would arrive in PAP early in the day. Plus we heard the driver of the 2:30 bus was good, nothing to be taken lightly in the challenging driving conditions of Haiti.

The bus was able to go fast on the smooth road, lightly trafficked road (at this hour) leading out of Les Cayes. As we left the coast line and crossed the southern peninsula, the sun was rising and we began driving through some towns as we approached PAP. Even at 5:30 am on a Sat. morning, the streets and towns were filled with people and vehicles. Haiti is on the same time as the midwest, giving them early morning light.

As the traffic picked up, our bus began passing other vehicles. We had one scary moment in the passing lane when we were barrelling toward a truck and it didn't seem as if we had time to get over. "Yikes!" I said right before our bus driver pulled back into the right lane ahead of the truck we were passing, avoiding an accident by the hair of his chinney-chin-chin. "I can't believe there aren't bodies all over the road," muttered the man next to me.

We drove through what was left of Leogane, the epicenter of the earthquake. Lots of tent cities. Carrefour, a sprawling suburb of Port-au-Prince was in bad shape. Carrefour is an oceanside town that then goes up the mountains. In between the ocean and the mountain is a flat, fairly narrow piece of land. It seemed as if all of the rubble from the earthquake had been swept into this flat area and was competing for space with all of the people, markets, and structures that didn't collapse. It is a jumbled mess.

We arrived at the airport and got a ride to Gertrude's guest house, where he headed out on another adventure. More in the next post.
Posted by Maria Carroll at 10:49 AM

Oh my gosh, Maria, I got the chills as I read this. I am not good at harrowing experiences on the road or in the air. Give me even the slightest turbulance and I am praying up a storm. (Actually, I'm praying for an end to the storm, but you know what I mean.)