Of Amputees and Assumptions 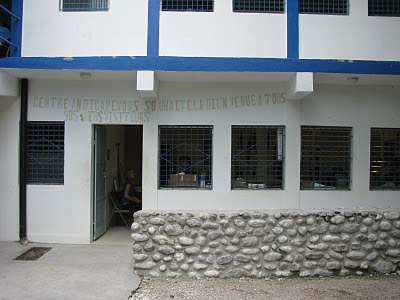 For most of our week at the guest house near Les Cayes, a couple of guys from the United States have also been residents. One of them Peter, a recent high school graduate, was born in Haiti, but grew up in Florida. He was assisting Derek, a doctor and the other resident, with translating in a clinic where they were working. Peter's father is from this area, as his some of his family.
One evening, I was sitting at the desk in our room typing, I heard the front door slam. When I got up to look in the living room I saw it was Peter along with a man who didn't have any arms. "Wow, that guy really suffered in the earthquake," I thought as I ran through a list of everything he wouldn't be able to do: feed himself, get dressed, write, or even give someone a hug
Later in the evening, I asked Peter if the man he was with was one of his patients. Peter looked puzzled, so I continued. "The man who didn't have any arms."
"Oh," said Peter. "That was my dad."
Wow, talk about false assumptions.
We found out that Peter's dad lost his arms in a sugar cane auger when he was 13. One arm got trapped and he instinctively went for it with his other arm and it was trapped. He lost both of his arms right below his shoulders.
This was a reminder to me that Haiti was a dangerous place with numerous people who lost limbs BEFORE the earthquake. Now this awful natural disaster may have created 100,000 or more amputees.
Because the need for prosthetic limbs has always been great in Haiti, the hospital in Cite Lumieure, down the road from where we are staying, has a prosthetic unit that is pictured at the top of the page. It has been extra busy lately as teams from the United States and other countries fly to Haiti to make and fit prosthetics for people who need them.
This week we saw a young woman, whose leg was amputated well above the knee, receive her prosthetic limb. One of the woman on the team explained that it is much more difficult to learn to use an artificial limb when the loss of limb occurred above the knee. We watched this young woman walk gingerly back and forth across the room, getting used to the way the prosthetic bent.
Making prosthetics isn't a quick process; it involves making casts of legs. A kiln, pictured below, is used. The team made eight prosthetics this past week. They will also see the patients for adjustments as they get used to their new legs.
Hopefully, like Peter's dad, who has gone on to earn two degrees and raise a wonderful family, these people who have had such loss, can go on to lead productive lives. 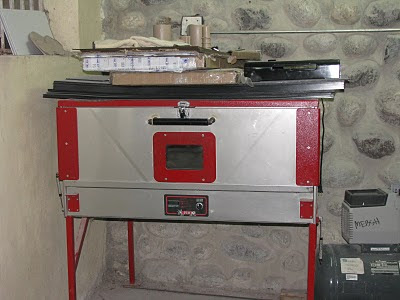 Posted by Maria Carroll at 2:19 PM