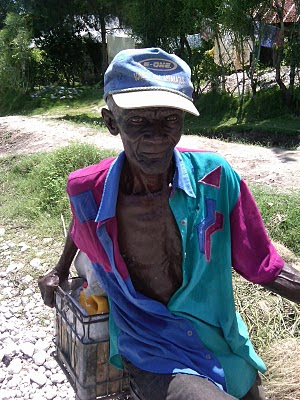 The illnesses and injuries that John saw in patients on his most recent trip to Haiti were staggering. One woman's foot was literally rotting off her leg due to untreated diabetes. Because there was no anesthestist available, the woman had to wait a week for surgery. So instead of having her foot amputated, she had to have her leg amputated below the knee because the gangrene had spread.
The left side of one man's face was swollen to unbelievable proportions because of untreated tongue cancer that had spread to his jaw and neck. All John could do was give him pain medication.
One man had lockjaw from tetanus. His family would bring him liquid food that they were able to feed him.
A 30-year-old man fell out of a tree and broke his back. The staff was trying to figure out the best way to tell him that he would never walk again.
A married woman was trying to come to terms with the fact that both she and her husband tested positive for HIV.
Delayed treatment, lack of prevention, a hazardous envirnoment, lack of adequate medical care--these are some of the reasons that people are so ill. It can be overwhelming to learn about, so much so that we can throw up our hands and say, "It's beyond me."
But that attitude ensures that things will stay the same. I want to challenge everyone reading this to do one small thing to help Haiti. Think about what that could be.
Posted by Maria Carroll at 5:39 PM No comments: 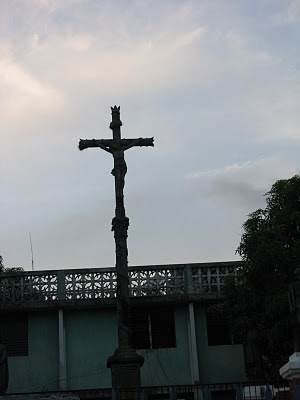 Posted by Maria Carroll at 9:15 PM No comments: 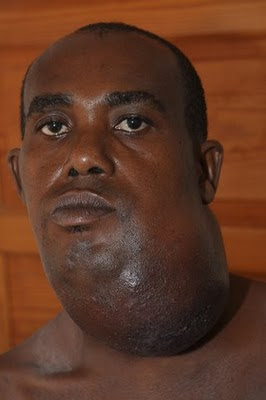 When we are in Haiti, we take a lot of pictures and use them in our blogs. Some of the pictures are of people who are suffering terribly due to illness or injury. We sometimes send these pictures to people in efforts to find medical care in the U.S. for people who are beyond the help of Haiti's meager system. Such is the case with the man pictured above who likely has cancer of the tongue and has received no treatment for it. All John can do for him is medicate his pain. Sometimes we send pictures to show people the kinds of problems that people in Haiti have. We also give presentations at home and we use the pictures to illustrate the difficulties of life in Haiti. Sometimes, as with the picture above, these pictures are hard to look at.
At least on the surface, people's responses to disturbing pictures fall into one of a few categories: shock and sadness; apathy (what can I do about these problems that have been around as long as human beings themselves); anger (either at the situation or at us for showing them the pictures); or a non-response (perhaps this is a form of overwhelm).
With our 24 hour media beaming images of the latest disaster into our living rooms round the clock it's not surprising that people can become jaded. We're all busy with important things and having our attention grabbed however momentarily by a picture like the one above isn't a pleasant experience. For myself, though, and despite the much greater exposure we have to the world's suffering than we did even 25 years ago, I find seeing pictures like this a necessary experience. For despite my access to information, it's too easy for me to forget.
As I was pondering the above issues earlier in the week, I came across a bumper sticker with the following wisdom:
Think occasionally of the suffering of which you spare yourself the sight.-Albert Schweitzer
So at least for today, we are not spared.

Posted by Maria Carroll at 8:58 AM No comments: