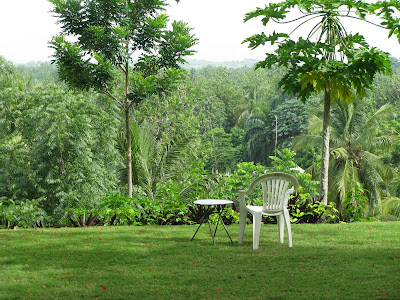 Since John's last trip to Les Cayes, he had been wanting me to meet a German man, Johannes, who lives in the area and knows a lot about Haitian history. As you will see, in fact, he and his wife Luise are living on top of it.
We met them at their home just up the hill from our guest house. Johannes and Luise have been living in Haiti since 1975. Since then, Johannes has learned a lot about Haitian history. He explained to us the difference between the two native groups who populated Haiti before Christopher Columbus arrived. The Tainos, the majority group, were originally from Brazil and were peaceful. The more aggressive Arawks, who came from the northern islands of South America, like Guyana, would send attacking parties to fight the Tainos, and, according to Johannes, also practiced cannibalism.
Johannes then brought out some of the pottery and other artifacts that he has found on his property. 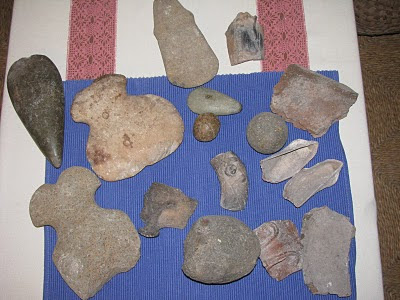 The dirt holds layers of history: the lower you go, the more ancient the history. He has also found bottles and other things that the French brought over. Johannes held out a part of a bone and said, "Here's just a little piece of someone's body that tells how they died." It was a vertebrae with part of a iron rod through it. 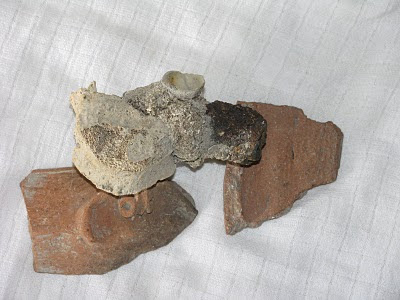 The Haitian Revolution, which started in the 1790s was a bloody war. "It was based on dishonesty," said Johannes. The French told the slaves that if they helped them defeat the Spanish, who were attacking from the east side of the island and the English, who were attacking from the sea, that the French would give the slaves their freedom. Napoleon reneged on the deal, though, and things got ugly. With its massive production of coffee, sugar, and other products, he thought Haiti, the richest French colony and one of the richest colonies in the world, was too valuable of a colony to lose. When the Haitian slaves defeated Napoleon's troups, the first and only black republic started by freed slaves was born.
The picture at the top of this post is a view from Johannes' backyard. After breakfast, we went outside and Johannes showed us a wall of dirt where he began picking out little pieces of property. It's amazing what history we are living on top of! 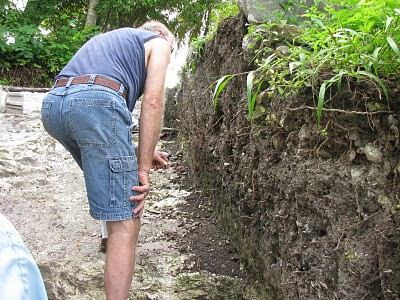 Posted by Maria Carroll at 2:26 PM