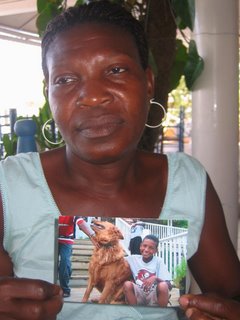 Prayers, the will to live, and good medical care can go a long way in keeping a person alive as they did with our friend Willy Fortune. Here is a belated update on Willy. He was hospitalized at OSF St. Francis Medical center on June 21 with shortness of breath and lots of fluid on his abdomen. (You can read more about these events at the entry from July 26, The Story of Willy Malavolti).

After more than a month in the hospital, on July 28, Willy had surgery to replace two heart valves on. He was in critical condition for weeks afterwards. He remained on the ventilator until August 16, had fluid on his lungs, blood clots, emergency surgery for a punctured colon, and chronic kidney failure. Willy coded at least once during this time. One of the doctors on the floor gave him a zero percent chance at survival, but added that because it was Willy, that might be enough.

And sure enough despite some setbacks, day by day, Willy grew stronger. His kidneys were supported by dialysis and when they continued not to improve, peritoneal dialysis was installed on September 23. The day before this procedure, Willy was able to talk with his Haitian mother who told him he was being prayed for all over Haiti, including at the cathedral in Port-au-Prince. She told Willy to have faith. “God begins things, and God ends things, she told him.”

On October 5, the miracle we were all praying for, the miracle we hoped the Haitian statue of Mary overlooking Willy portended, occurred. Willy went home from the hospital! He is now with his large and loving family, continuing his recovery. Please keep Willy and his family in your prayers!

In the picture above, Willy's Haitian mom holds a picture of him at his home in the United States. She had just spoken on the phone to Willy, who was in his hospital bed at OSF St. Francis Medical Center.

Posted by Maria Carroll at 11:53 AM No comments: 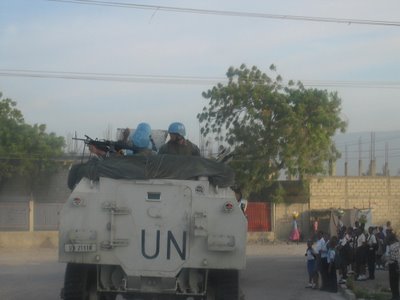 My husband John, besides being an amazing doctor, also takes some amazing pictures, this being one of them. On the way to clinic, the driver was following this U.N. tank, when the soldier leveled his gun as they passed a cemetary on a dangerous corner. What a world we've created for our children.
Posted by Maria Carroll at 1:47 PM No comments: