"Where there is great love, there are always miracles." 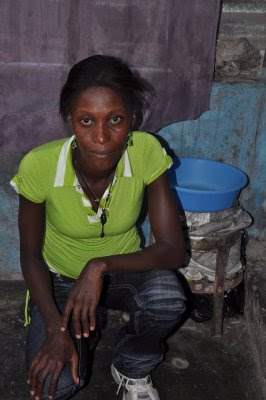 Heurese had successful heart surgery at Cleveland Clinic on Tuesday. She had her faulty aortic valve replaced with an artificial one and an existing patch, which covers a hole in her heart, was reinforced.

There are so many factors in Heurese getting this surgery that can only be described as miraculous. Here's one of them.

Heurese has been a Haitian Hearts patient since 2001, when she first came to the United States for surgery. Since then, my husband John has been bringing her medicines and checking on her a few times a year. However, because of a family situation, he hadn't been to Haiti at all this year until November.

Sometime this summer a young man named Frandy, who is a healthy Haitian Hearts patient and who helps us with certain tasks in Haiti, entered a cybercafe in Carrefour, a huge, poor, suburban slum (if that's not an oxymoron) of Port-au-Prince. Frandy needed to get in touch with John about a patient, but he didn't have any money to buy minutes. So he yelled out as he entered the cafe, "Does anyone have a couple of minutes I can use for an emergency e-mail?" A young man sitting at one of the computers raised his hand. Frandy sat down and began typing out his message to Dr. John.

When the young man saw who Frandy was writing, he said to Frandy, "Do you know Dr. John Carroll?" Frandy responded yes. Well, it turns out that this young man was Heurese's brother, and he wanted to get in touch with Dr. John himself because his sister was very sick.

As Frandy later discovered, the brother wasn't exaggerating. Heurese was at home, too weak to walk, having sent her two young children to live with relatives. With Frandy's help, John was able to get Heurese medicines that stabilized her situation. Then later, she went to Providence Guest House in Port-au-Prince to rest and receive good nutrition until her trip to the United States.

An encounter at a cybercafe that strains the boundaries of coincidence was necessary to the chain of events that led Heurese back to the United States for life-saving heart surgery. Maybe we shouldn't be surprised. As Willa Cather said, "Where there is great love, there are always miracles."

Heurese pictured above in her home in Carrefour.
Posted by Maria Carroll at 3:39 PM No comments: 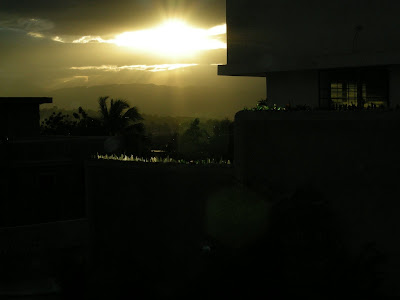 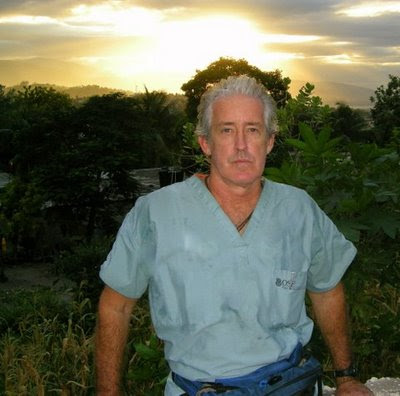 We at Haitian Hearts want to work toward a world where people like Miterlande get the health care they need without it taking a miracle. Because it shouldn't.
Posted by Maria Carroll at 12:46 PM No comments: 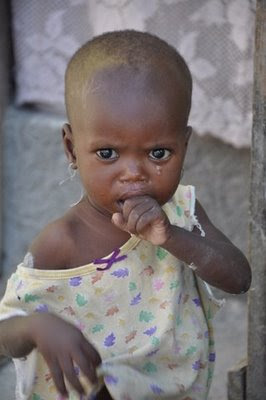 A few posts back, I described some of the many problems facing Haiti that were compounded by the four hurricanes that hit the island nation. A commentator quite reasonably asked, "How about offering some solutions?" At the talk John and I gave three weeks ago, a sister asked basically the same question: "What can we do?"

Yes, it's a lot easier to detail Haiti's problem's than it is to figure out what to do about them. Sometimes I'm a little afraid by describing the many hardships in Haiti so often and so thoroughly, I will scare off people. They will shake their heads and say, "The problems are too big. There's nothing I can do." I've heard people say that Haiti is hopeless.

Well, Barack Obama had a great line in the speech he gave election night: ". . . while we breathe, we hope." Despite their hard lives, Haitians do have hope for themselves. Those of us who've had the opportunity to go to Haiti, to meet Haitians, and in some maybe small way, become part of their lives know that they are special. I'm trying to think of how to describe their specialness and all I can come up with is a bunch of cliches: hard working, hospitable, persistent, love of laughter and song, the desire to better their lives. The end result is that, as one fellow traveler put it, when you go to Haiti, you leave part of your heart there, and you can only get it back when you return to Haiti.

But you don't have to travel to Haiti to make a difference. Let me list some things that you can do.

1. Educate yourself. There is lots of stuff on line. Check out Bob Corbett's website. I will write a post about Bob's list serve soon. If you want to start with one book, I would recommend Mountains Beyond Mountains by Tracy Kidder. I believe that there are links between our political and economic policies and habits and some of the tragedy in Haiti. This is worth learning about.

2. Examine your life. I believe that there is a connection between how we in the developed world live and how those in poor countries live. (Check out Paul Farmer's The Uses of Haiti for more evidence). We can all make changes (and the current economic situation may force us to) in our lives that will help not only the poor of the world, but also ourselves. Some examples: recycling, living on less and upping our charitable contributions, becoming more conscious of our choices and how they affect our communities and our happiness levels.

3. Give of your time, talent, and treasure. Giving money is an obvious way to help. I like to have some kind of personal connection to the places I give money. Here are some organizations to consider if you want to help Haiti.

Partners in Health.This is the organization started and run by Dr. Paul Farmer, who has changed the way that poor people in the developing world with HIV-AIDS are treated. Which is to say, they receive treatment.

The Daughters of Charity. This international order has 32 sisters in Haiti who run feeding programs, schools, and health clinics. My husband John frequently works in their clinics and, we see the good work they do.

Hands Helping Haiti (H30). This small, effective organization works to educate children in Haiti. Education is definitely one of the keys to solving Haiti's problems.

These are just a few of the groups that do wonderful work in Haiti. If you are interested in giving money to help Haiti, I encourage you to check out their websites.

Solving the problems of Haiti so that fewer children die will take a long time. But that's no reason not to start now.
Posted by Maria Carroll at 12:59 PM 1 comment: