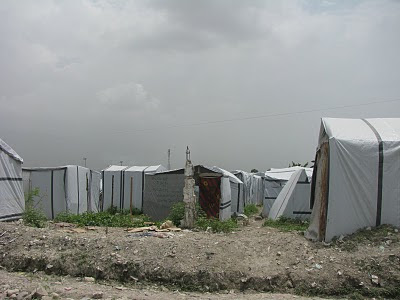 Almost six months out from the earthquake, the most noticeable change to my eye is the tents: they are everywhere, some places in huge camps, sometimes in small groups, and occasionally there will be a lone canvas pitched off by itself. The tents are in industrial areas, on private property, on government property. They are often found where houses were once located. There are even tents in the medians of roads.
This is not to say that other effects of the earthquake aren't obvious. Rubble is strewn everywhere, more than usual. Half completed buildings hang in ruins. Certain parts of the city were damaged more than others: the Delmas section of Port-au-Prince appears to have been particularly hard hit, A portion of the road Delmas 31 was destroyed and we had to hike down through a steep gully and cross a dirty stream to make our way down the street. The inpatient unit at Grace Children's Hospital on Delmas 31, a special place to us, is not functioning and tents serve as the outpatient clinics.
One of our Haitian Hearts patients, Jenny G., pictured below, is standing next to the car she slept in the first two months after the earthquake and the tent that served as her bedroom after this.
So it is the tents that may be the most ubiquitous symbol of the earthquake. 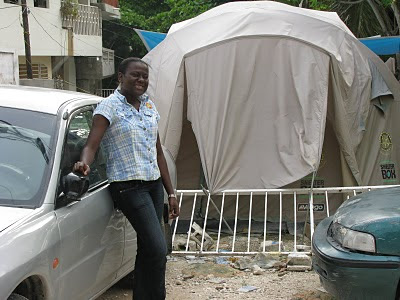 Posted by Maria Carroll at 8:22 AM