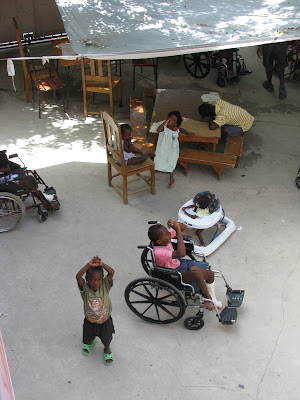 Our friend Gertrude is doing a hero's work in Haiti. She runs a guest house/orphanage in LaPlaine. Gertrude's original guest house in Delmas was destroyed in the earthquake. Gertrude was sleeping at 4:52 pm when the earthquake struck. It woke her up and she was disoriented. She fell three times as she tried to run. "Jesus, help me," she cried. The rumbling stopped and she ran outside as her guest house was crashing down.
Prior to the earthquake, Gertrude had the house in LaPleine where abandoned children were staying. Fortunately, none of them was hurt in the earthquake. Some of the children she cares for were abandoned at the General Hospital. Some of them are disabled. The orphanage currently has 37 children. Her guest house, Providence, helps fund the orphanage. She has 22 staff members to care for these children. As you might imagine, there are many expenses in running an orphanage.
When I asked Gertrude what she would do if she were in charge of Haiti, she gave a three-part answer. First, she would feed the people. Next, she would focus on the long-term progress of the country, creating housing and jobs. Finally, she would build infrastructure throughout Haiti, not just in Port-au-Price. "If people had what they needed in the provinces, they wouldn't come to Port-au-Prince," she said.
"In the hour of our poverty, this is the time for it," she said.
Posted by Maria Carroll at 8:48 PM