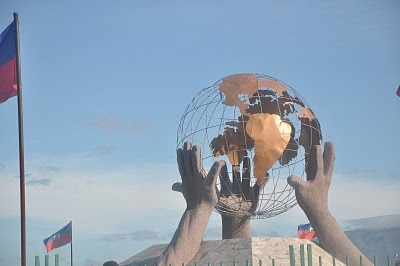 I am a member of Bob Corbett's Haiti listserv, which has been an invaluable source of information on Haiti before and after the earthquake. I know there has been some reporting on looting that is occuring in Port-au-Prince. I offer the two below reports from people who are currently in Haiti. These accounts were made yesterday, January 17. To them, I would add the following observations: on our trips to Haiti, we have always been amazed at the lack of crime (the gang/political crime, notwithstanding)on the part of almost all people, especially given the lack and incompetence of the police and judicial system. Also, I am afraid that if I were in the same situation as the people in Port-au-Prince, I would be doing what I could to get food and water for myself and my family, even if it meant looting.

Ciné Institute Director David Belle
reports from Port-au-Prince:
"I have been told that much US media coverage paints Haiti as a tinderbox
ready to explode. I'm told that lead stories in major media are of looting,
violence and chaos. There could be nothing further from the truth.

"I have traveled the entire city
daily since my arrival. The extent of damages is absolutely staggering.
At every step, at every bend is one horrific tragedy after another;
homes, businesses, schools and churches leveled to nothing. Inside every
mountain of rubble there are people, most dead at this point. The smell
is overwhelming. On every street are people -- survivors -- who have
lost everything they have: homes, parents, children, friends.

"NOT ONCEhave we witnessed a single
act of aggression or violence. To the contrary, we have witnessed neighbors
helping neighbors and friends helping friends and strangers. We've seen
neighbors digging in rubble with their bare hands to find survivors.
We've seen traditional healers treating the injured; we've seen dignified
ceremonies for mass burials and residents patiently waiting under boiling
sun with nothing but their few remaining belongings. A crippled city
of two million awaits help, medicine, food and water. Most haven't received
any.

"Haiti can be proud of its survivors. Their dignity and decency in
the face of this tragedy is itself staggering."

I'm just passing this updated from Sasha Kramer of SOIL along:

"Apologies if these upcoming posts seem unpolished…that is because they are…we barely have time to write and internet is patchy so I will do what I can to get out information but I don’t promise eloquence.

Love to you all and know that we are safe and taking precautions.

Last night we arrived in Port au Prince just before sunset. As we came into the city with our truck piled full of water, gas, shovels and food we got a flat tire. The news reports of looting have been so exaggerated that we were concerned that a mob of people might come take everything before we even made it into the city. I am pleased to report that, as per usual, reports of violence in Haiti are largely disinformation. Yes, we did hear shooting late last night, and yes we did see a fight over a mattress at a camp in the city but our overall impression has been sheer amazement at the solidarity displayed by communities.

We drove into the city past the airport and along Delmas 33. Initially it looked like about 1 in 5 houses had sustained damage and perhaps 1 in 20 had completely collapsed. However as we got father in towards Delmas the damage looked much more severe with perhaps 1 in 5 buildings completely collapsed. I have never seen anything like this, honestly it is hard to even feel. People have not even begun to mourn as everyone is still in a state of crisis. As we drove by the police station on Delmas 33 we saw someone carrying a severed foot of a police officer out of the wreckage…I barely even blinked…everything is so surreal.

We went straight to Matthew 25, a guesthouse which remained relatively untouched by the quake. We went to locate our friend Amber who has been helping to coordinate volunteer efforts. We are so grateful for the way in which we have been received by the guesthouse, they immediately allowed us to remove all of the materials from the car and invited us to sleep in the backyard (no one is sleeping inside as the aftershocks have continued over the past few days). I was so amazed to run our dear friend Ellie Happel at the guesthouse. She flew in from NY the day after the quake to help with relief.

Once we had unloaded the car we all went with Marcorel to see his family in Jake. When we arrived it was already dark and there were people sleeping everywhere in the streets. As we waited for Marcorel to make his way through the camp to locate his family we saw several young men from the neighborhood setting up a large light rigged to some batteries. As light flooded the crowd of people they burst into song. Songs of solidarity, songs of grief, songs of thanks that they had survived. We followed Mako through the blankets and makeshift tents to where his family (8 brothers and sisters and his mom and dad) huddled together on a pile of blankets. They were so happy to see him and we all piled into their bed and Ellie, Paul, Cat and I were each handed a baby. The singing continued in the background as Marcorel’s family told the story of where they each were when the quake hit.


With love from Port au Prince,
Sasha "
Posted by Maria Carroll at 9:17 PM

I am heartbroken but inspired by the words of Sasha Kramer. Does her writing come from a blog? If so, could you post the URL here, of her blog or the blog of her organization, so that I might read directly from it in the future?

I found your blog by accident, while searching through articles about the astonishing failure of the UN "relief" mission since the earthquake. I wish I could scream to the world this message about solidarity winning over looting, rioting and savagery. Thank you for writing about this specific issue, which is rarely reported to the world by the media.

I am a volunteer nurse in Haiti and have worked setting up makeshift clinics in the remote areas as well as in Port Au Prince at the Project Medishare hospital. I tried to work with the UN during the first weeks after the earthquake, only to find [strictly from my personal observation] a fractured and incompetent agency. I joined several other groups, filled with people like me, who realized early on -- what the goal of the UN was not... and it was not there to respond to the people.

I returned to Los Angeles after five weeks, for a break with my family and will return this Thursday, with my son Brett, for six more weeks. I am returning for two reasons - the first is to continue working in the clinics/hospitals and documenting the small successes of the medical relief mission. The second to document the overall failures of the official relief efforts.

I have read through most of your blog and want to thank you for posting the stories. It is more reassuring every time I run across people who love Haiti and her people. If you would like to read the journal my wonderful husband keeps for me while I am there, you can find it at www.stefoscope.blogspot.com.