Who Should We Blame? 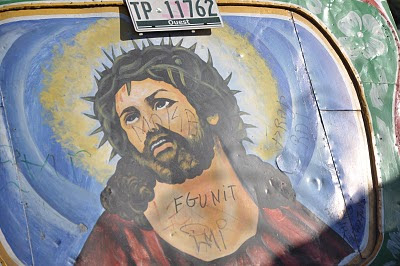 Pat Robertson's comment about Haiti being cursed because of a deal its founding fathers made with the devil is getting a lot of play. Unfortunately, this belief isn't that uncommon among certain Christian denominations, some which have groups that work in Haiti. John has heard it for years (often in tandem with anti-Catholicism). A poster on the Corbett listserv has a page on her blog with links to different groups that espouse this view. I had a comment on this post from someone who seems to be in the Rev. Robertson camp:

If I may state what I believe to be the truth-Haiti is a culture deeply steeped in voodoo. In 2003, the president officially recognized it as a national religion. This is dangerous stuff. IT CHASES GOD OUT. I pray for the people that they will reject all evils that bring the one known as 'the destroyer' (satan) to reign in their country.

With something as horrendous as the situation in Haiti before the earthquake and now with the incomprehensible disaster the shaking ground has wrought, it's understandable to want to try to explain things. And we would like explanations that absolve us from responsibility or guilt, thank you very much. So let's blame it on an alleged pact with the devil that, abetted by voodoo, curses Haiti to this very day.

If you are comfortable with that explanation, here's a question to ponder: Is it the perpetrators of evil or the victims of evil who are cursed?

Now, we don't usually describe natural disasters like earthquakes as evil, but I can tell you that Haiti has had a lot of evil directed its way, evil that contributed to the country's fragile state and making the earthquake so very destructive. Here's a short list:

In short order, Columbus and his fellow Europeans wiped out the Arawak Indians, the original inhabitants of Haiti. This led to. . .

Slavery. The French needed people to work the coffee and sugar plantations. They were so cruel to the slaves, that the slaves died faster than the birth rate could keep up, requiring the French to constantly kidnap more people from Africa.

After the independent Haitian republic was founded, the French demanded millions in repayment for lost profits from Haitian exports. Haiti paid the huge sum, which put the country perpetually behind the financial eight ball. Can you imagine the United States paying England for agricultural profits owed during the American Revolution?

Haiti was founded in 1804 but not recognized by its powerful neighbor to the north, the United States until 1862 when we were in the midst of the Civil War.

I'll stop here and save the rest of the world's sins for another post.

This weekend, Haiti was the subject of much preaching at places of worship. While disavowing Robertson's remarks, my pastor compared the situation to that of the Christian scripture story of Lazarus, the poor man. Lazarus, who suffered miserably on earth, went to heaven, but the rich man who ignored him went you-know-where.

WOW...a powerful story! It is interesting that many Christians still believe God is on the "side" of the rich and powerful who are so "blessed." It is crazy that we STILL think that God's love=earthly stuff, power and comfort. Have we even been reading our Bibles??

Dang! Satan really is the Father of all lies!

My belief of Voodoo is impossing a negative belief onto someone else. Therefore those that say what they say of Haiti are in fact following Voodoo. Just food for thought.

Thank you for your blog. I really feel the need to be in touch with Haiti.

God bless you can you add me too your email list musicchanginglives@live.com

God bless you can you add me to you email list musicchanginglives@live.com

PLease Stop talking non-sense ! Earthquake can happen everywhere .There is nothing about the vodoo and the Earthquake .What happen in Haiti ,many years the scientist knew it will happen one day .So please ...stop confusing people