Sullivans on the Scene 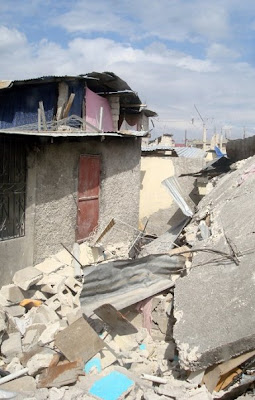 John's cousin's daughter, Emily, a newly minted nurse anesthetist, arrived in Haiti a few days ago. She is working at a hospital in or near Carrefour, which was the epicenter of the earthquake. It is also where Frandy lives, and wouldn't you know, he and Emily not only bumped into each other, but correctly guessed who the other person was. "Are you Emily?" "Yes. Are you Frandy?" "Yes." Pretty amazing.

This is Emily's first trip to Haiti. Her cousin Jesse, whom I wrote about here, helped arrange the trip. Jesse is volunteering at the Haitian embassy in Washington, DC, assisting with the tent cities. In her first e-mail home, Emily writes:

Conditions are worse than imaginable. The entire city has suffered distruction. The streets are lined with make-shift tents. Even families whose shelter remains standing choose to live in the streets for fear of after-shock. Recently orphaned children sit blank-stared on sidewalks just lost. As we drove to the hospital, the smells are overwhelming. Many bodies remain trapped under rubble...it has now been over 2 weeks. My team joined with other Doctors without Borders. We sleep in tents outside the Hope for Haiti clinic across the street from Hospital Adventista. My first night, I was woken up to someone from the hospital across the street calling for the "blonde-hair anesthesia". There are two anesthetists (myself included) to our team. I grabbed my new-found CRNA friend and ran next door. There was a stat c-section at the hospital. The conditions are unbelievable. Make-shift ORs with out-dated drugs that I have only read about. But we have an anesthesia machine!

This morning I worked in a public health clinic. 6 of us assessed over 250 Haitian men, women, and children. Later in the afternoon I went back to the hospital to help with anesthesia.

Tommorow more surgeries. Will try to keep in touch later.

Take nothing for granted.

We have our worries and frustrations
But our houses are standing and
when things go wrong,
there are people to help.
In Haiti a broken world explodes
and the people have to pick up the pieces.
Posted by Maria Carroll at 12:56 AM

China and Russia put the blame on some screwed up experiments of US for the earthquake that happened in Haiti.
Chinese and Russian Military scientists, these reports say, are concurring with Canadian researcher, and former Asia-Pacific Bureau Chief of Forbes Magazine, Benjamin Fulford, who in a very disturbing video released from his Japanese offices to the American public, details how the United States attacked China by the firing of a 90 Million Volt Shockwave from the Americans High Frequency Active Auroral Research Program (HAARP) facilities in Alaska
If we can recollect a previous news when US blamed Russia for the earthquake in Georgio. What do you guys think? Is it really possible to create an earthquake by humans?
I came across this [url=http://universalages.com/hot-news/what-happened-in-haiti-is-it-related-to-haarp/]article about Haiti Earthquake[/url] in some blog it seems very interesting, but conspiracy theories have always been there.