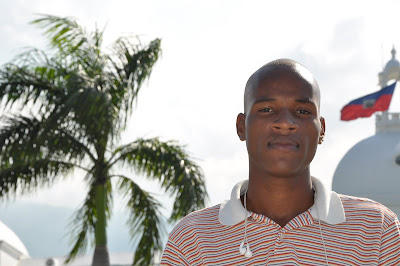 We are worried about numerous people in Haiti, including Frandy Dejean. A poor boy, he grew up on the side of a mountain in Carrefour. He came to the attention of Haitian Hearts because of a heart problem. We brought him and his mother to St. Louis for medical care. Like many Haitians, Frandy fell in love with the United States, and it is his dream to return.
After Frandy returned to Haiti and with the help of his generous host family in St. Louis, he attended high school and passed all of the necessary exams. Frandy has been studying hard for the TOEFL (Test of English as a Foreign Language). A passing grade on this test would gain him admittance to a U.S. college.
Besides his academic work, Frandy has provided invaluable assistance to Haitian Hearts. He has located patients for us, taken them to medical appointments, helped them get passports. Everything is difficult in Haiti, and one of the above tasks can take days or weeks to coordinate. Frandy has persevered through all the obstacles--terrible roads, unreliable transportation, incompetent government.
Frandy's love for the United States has not always been returned. This past summer he applied for a visa to attend an English-language school in St. Louis. He had a sponsor, willing to host him and pay for his schooling. Nonetheless, he was denied a visa. I quote below from the letter we received from the U.S. consulate official:
Mr. Dejean was found ineligible for a visa under Section 214(b) of the U.S. Immigration and Nationality Act. Under this section of the law, all applicants for non-immigrant visas must demonstrate that they have a residence outside of the United States as well as professional, family, financial, and community ties which will ensure their return at the end of their authorized stay.
Let me unpack this for you. What the law basically says is that if you don't have a job or money to return to, you are not eligible for a non-immigrant visa. Or in other words, if you are poor, no visa.
Frandy is definitely poor. It didn't matter to the U.S. consulate that Frandy had worked hard to pass high school, that he had a sponsor for his schooling, that after the completion of this program, he wanted to return to the United States for college. He couldn't demonstrate sufficient ties to Haiti to satisfy the U.S. consulate (i.e. he is poor) and was denied a visa.
Frandy hasn't given up though. Give up isn't part of him, which is why we have hope that he is still alive. We have been watching the news, but their are huge portions of the Port-au-Prince that we know nothing about.

So we pray and wait.

Posted by Maria Carroll at 2:02 PM

please let us know if as soon as you know something about frandy.

Reading this site i can make an idea of how bad is the situation there in Haiti. I cannot believe it.
My name is Santiago, I am from Argentina. I am a little journalist and I wonder if I can make you some questions about Haiti and post it in my blog, so here in Argentina your information can be readed in spanish. What you think?
Thanks for all.