A Friend on the Ground 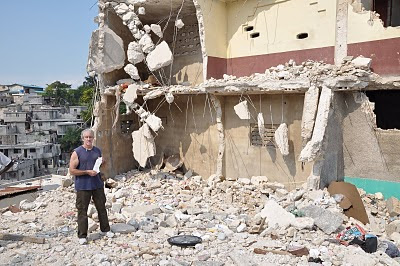 Our friend Mary Hurley, who for years has lived six months of each year in Haiti, arrived there yesterday. As you can imagine, she knows many Haitians and the main purpose of her trip is to find and help people she knows, many whom are very poor. She will also be helping coordinate the efforts of others who want to help.
Mary works with Mother Teresa's order, the Missionaries of Charity who have several communities in Haiti. The Order was able to arrange jet transportation for Mary and her friend Marie, another Haiti veteran, from Miami to Port-au-Prince. Mary and Marie will be staying with the Sisters on Delmas 31, the site of the Sisters' home for children in Port-au-Prince. Mary usually works at San Fil, the home for the dying that the Sisters run elsewhere in Port-au-Prince. Sadly, now, much of the city has been turned into a place of the dying.
Mary is worried about many people--Kethia and Dieula, to name two. Thankfully, she has heard that Heurese, Guerline, and Gertrude, who runs the guesthouse where Mary usually stays, are safe. The guesthouse has been destroyed, but Gertrude is okay, as is her daughter Rosie who was in a boarding school in Port-au-Prince.
The Internet and cell phones are indispensible in communicating. Ten years ago, phone communication from Haiti necessitated a satellite phone. We have received cell calls from Frandy and Heurese. John has called Frandy on Skype, though he couldn't hear us. Frandy has actually been able to post on his Facebook account. The discrepancy of being able to communicate like this with people from around the world while you are homeless, hungry, thirsty, and don't know what is going to happen next is like some kind of science fiction gone wrong.
Even though Mary is a veteran of Haiti--indeed it is her home--even though she speaks Creole, even though she has spent most of her time in Port-au-Prince helping the most destitute of Haitians, she said to John, "We realize we don't know what we are getting into." It's not unlike a first trip to Haiti she said.
As we hear from Mary, we will keeo you posted.
Above: John in Haiti before the earthquake.
Posted by Maria Carroll at 12:27 PM

Praying for all of Haiti.. My mother(Cheryl) work's at the place that a few of the ladies have stayed after surgery in IL.I have been giving her updates as i see them Posted...
Thoughts and Prayers

I have donated to the red cross for help in haiti but it feels like its not enough. What else can we do to help frandy and your friends? I saw Frandys blog and it just breaks my heart.

We are going to be wiring money to our friends and patients in Haiti. If you want to send a check to Haitian Hearts and write a note as to who you'd like us to send the money to we can send it for you. We will do this as soon as we have the capacity. You can get our mailing address at www.haitianhearts.org

thank you maria, will do.

Hi! My name is Gilberte Francois. I just want say thank you for everything that you have done for me and for all the people in Haiti.. God Bless you!!