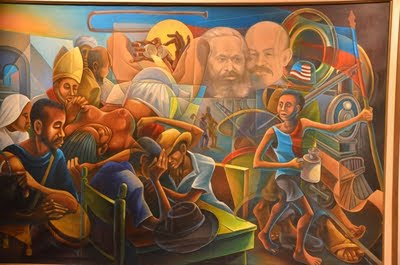 On Sunday, we had the opportunity to visit the Musee du Pantheon National Haitian, located across from the National Palace. The museum is built into the ground and--I don't know if this is the reason--sustained little damage in the earthquake.

The museum has two small wings, one devoted to the seven epochs of Haitian history and the other to artwork. A guide led us through both air-conditioned wings.

The historical wing was fascinating. As best I can remember, the seven eras of Haitian history are: the native period, the Spanish colonial period, the slavery period, the revolution period, two empire periods, and the presidential period.

The most famous artifact in the museum is the anchor from the Santa Maria, one of the three ships that Christopher Columbus sailed on his initial voyage. We snapped a few pictures before the guide told us no photography allowed, so we didn't get a photo of the anchor. However, we estimate it was about 10 feet tall and had the typical shape of an anchor.

The museum also contains the remains of the four men considered to be Haiti's founders: the great Touissant L'Overture, leader of the revolution, Jean Jacques Dessalines, founder of Haiti, Henri Christophe, the builder king, and Alexandre Petion, founder of the republic.

Pictured below are irons that would be put on slaves who escaped (maroons) and were recaptured. They would have to carry the 50-pound weight on their head. To this day, when Haitians refer to something very heavy, they say, "Cinquante livres," or 50 pounds. 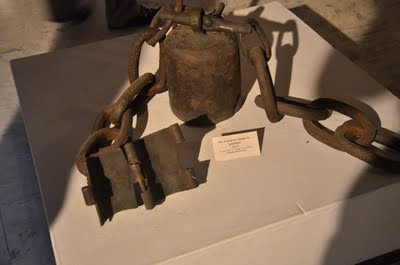 Pictured above is a painting from the art wing of the museum. It shows the metaphorical birth of Haiti, with many of the country's influences.

Posted by Maria Carroll at 7:32 AM