Haitian Hearts with the USNS Comfort in Haiti 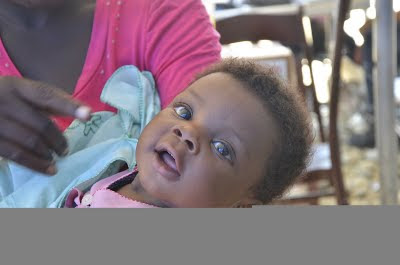 Now that the USNS Comfort has been docked off Haiti for three days, what’s been going on? The Navy, with the help of other branches of the services, the Haitian government, and a whole lot of NGO’s, including Haitian Hearts, set up a clinic specifically to screen patients for surgery on the boat. John was immensely important in this process as the Navy had him initially screen the patients. With his knowledge of tropical medicine, which is a nice name for trying to help people in poor countries with their health problems, and fluency in Creole, John was able to direct people to the appropriate station. It took only a day and a half for the ship’s 120 surgical slots to fill up. We were happy to see that one of our Haitian friends was able to get a surgical slot on the boat. We saw her off this afternoon in a smaller boat that was ferrying her to the ship.

Also for two days, and continuing on to the end of August, the Navy is running a shore side clinic at Port Verrieux, a private port the Navy is leasing, for people with non-surgical medical problems. Today was the second day of this clinic; 777 patients were seen today and 737 yesterday. John started working at this clinic today. It is not far from Cite Soleil, and many of the people who come to the clinic are from there. In many ways, this clinic is similar to others that John has worked at in Haiti.

So what the heck am I doing in Haiti besides writing this post and trying not to get sunburned? Check back next time!

Posted by Maria Carroll at 5:19 PM