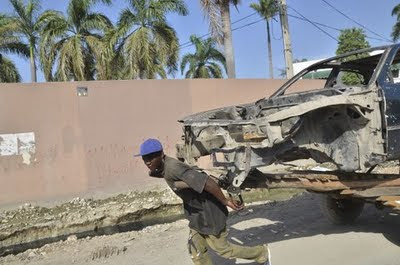 Please don't miss the irony in the title of this post. As a friend who visited Haiti right before we did told us, Port-au-Prince looked as close to its pre-earthquake condition as she has seen it. And she's right. A lot of rubble has been cleared away, people are moving about more easily, much of the shock seems to have dissipated. But what passes as normal in Haiti is unbelievably harsh. Take the fellow above, hauling a car on his back; he was likely doing this before the earthquake too.

Ot take Cite Soleil, which sustained little damage during the earthquake. John told us about a saying that went around Haiti after January 12: Earthquakes don't kill people; buildings kill people. Cite Soleil has few big buildings capable of killing people when they collapse. Lucky them.

But as we saw today in the clinic and when we toured St. Catherine Laboure, a Doctors Without Borders hospital and the only hospital in Cite Soleil, a community of 250,000 plus, people are suffering from poverty and sickness that should be inexcusable in the 21st century. Septic babies near death, a two-year-old with congenital cataracts, dozens of children in the Sisters' malnutrition program, a baby with a terrible, open, fast-growing staph infection on his groin.

Yes, things are back to normal in Haiti and normal isn't good.

Posted by Maria Carroll at 3:31 PM