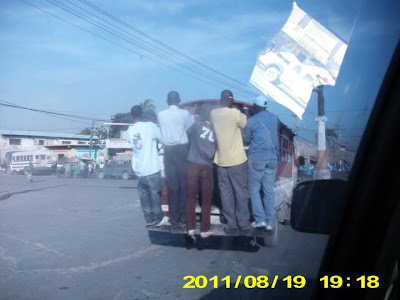 I’m happy to report that with the threat of Hurricane Irene gone from these parts, the USNS Comfort is back in the bay of Port-au-Prince. We saw it at 5:30 this morning from the roof of our house on Delmas 5. The plan is that today they will resume surgeries on the ship, and tomorrow the onshore clinic will begin again. They didn’t need doctors at the clinic today, so John headed back to Cite Soleil, to work at the Sisters’ clinic.

So this morning, my nephew Tommy, some other volunteers, and I rode a tap tap (not quite as crowded as the one pictured above), the battered pick up trucks that serve as Haiti’s public transportation, up Delmas to retrieve another member of our crew. We would then head to the clinic site to see if they needed any help setting up.

Delmas is a one of the main thoroughfares through Port-au-Prince, leading up to Petionville, a more prosperous suburb. I pointed out different landmarks to Tommy. There is what’s left of One Stop, where we used to buy groceries (some of the Delmas area was hit hard by the earthquake); there’s Alta Grace, where we occasionally went to church. There’s the road that leads to Luke’s orphanage.

When we reached Delmas 91, we turned down a very steep hill, rutted with large holes and rocks. We bounced down it carefully, if, indeed one can bounce carefully; it’s all fun and games until the breaks go out.

After we picked up Jenny, we headed back down Delmas, bound for Terminal Varreux.
The ocean was in the distance, blending with the sky, making it impossible to tell where one stopped and the other began. As we got closer, we saw the USNS Comfort; the all-white ship with the red crosses appeared to be suspended in the sky, sent down from heaven.

At Terminal Varreux, a small group of patients were waiting. We made our way through the newly created mud from last night’s rain, heading toward the dock, where the translators and patients would board a small boat to take them to the ship.

I rubbed my hand, and then noticed I had some black mud on it. How did that get there? Then I saw what I thought was a fly on my arm. I attempted to brush it away, but it didn’t go. I looked more closely at my hand, and saw that it was no mud; it was a squashed mosquito. I looked around at others and saw the huge bugs alighting on any patch of bare skin. I mean these suckers were ginormous! They were getting tangled in Tommy’s leg hair, so I sprayed him down quick with my mosquito repellent. For the next several minutes, we were consumed with repelling the hoardes through spray and slapping. This sounds exaggerated, but it was bad.

In my experience, Haiti mosquitoes are small, silent, and stealthily, less obvious even than the type we have in the States. These mosquitoes were not going to be put off by a mere brush away. They had to be smacked. These were like the Special Forces mosquitoes; they weren’t going to be leaving your skin until they had some of your blood. As our friend Kristin said, “This is like inviting malaria.”

Fortunately after only a few minutes of this onslaught, we were able to take refuge in one of the military’s SUV’s. Since our presence wasn’t required at Terminal Varreux—as much set up had been done as possible—we rode back to Delmas 5. We will see what tomorrow brings.