Last week an orphanage in Croix-des-Boquets, a village not far from Port-au-Prince, was attacked. The orphanage director, a Catholic sister, had fired a teacher for a problem, and he retaliated by returning with about 120 people, who were armed with machetes, sticks, and clubs. They wanted to execute the three sisters in charge and burn the building to the ground. The Haitian police couldn’t handle the situation, so the UN was called in. They surrounded the building and escorted the sisters from the premises.

Rather than disperse the violent crowd, though, which given their significant firepower—tanks, machine guns, etc—one would think they could do, they guarded the building until arrangements could be made to transport the children to other orphanages. After about two days, they loaded up the children on a school bus and took them to their new homes, namely other orphanages that had agreed to take them in. The bus got stuck in a ravine, and the UN soldiers had to call the orphanage director to come and get the 11 boys they would be caring for, all of whom had been riding around in the hot bus all day with no food or water.

In the meantime, back at the orphanage, the crowd was allowed to loot and demolish the orphanage contents and buildings—home, school, church. It is doubtful that any of those children will ever return to this location. And who knows if the Sisters can safely continue to work in Haiti.

The minimal response from the UN soldiers—peacekeepers—is why most people in Haiti vastly preferred the presence of the U.S. Marines to the UN. The Marines wouldn’t tolerate this kind of behavior by a lawless crowd. All over the world, the UN peacekeeping forces have been criticized for their lack of action. They stand around while crimes are committed in front of them. The forces here in Haiti are drawn from countries all over the world—Sri Lanka, Pakistan, Chile, Brazil, China. It’s a stretch to call some of these guys professional soldiers. In fact, the Haitians call them tourists, as the main goal of some of the soldiers seems to be hooking up with local girls.

Occupation by a foreign power is never ideal and centuries of complicated history involving the exploitation of Haitians has led to this state of affairs. But if you are going to have occupiers who carry big guns, they should use their power to defend and protect the innocent and not allow the bad guys to carry out crimes resulting in the displacement of 50 children and the theft and destruction of property. 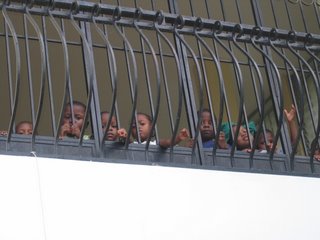 Posted by Maria Carroll at 5:47 PM