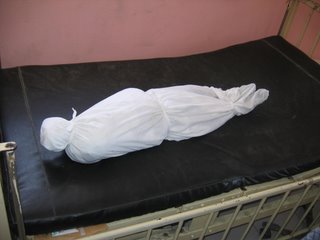 The above picture is of the body of a four-year-old boy, wrapped in a sheet. Over the weekend, he had a fever and a seizure. By the time his mother brought him to the clinic on Monday, he was in a coma. He received an IV of electrolyte solution. Four hours later, his respirations turned agonal, the slow, irregular rate heralding death. And then he was gone.

As of 2004, 117 children out of every 1,000 born in Haiti don’t live to see their fifth birthday. These children die of diseases like malaria, tuberculosis, typhoid, pneumonia, diarrhea. Their lives and deaths aren’t reported in western media, other than as an aggregate statistic. At the beginning of this month, a child in Massachusetts died of a mosquito-borne illness. I know this because it was reported in an article by the Associated Press, along with a beautiful picture and a description of the child.

I would like the above photograph to literally flesh out the sad statistic of child death in Haiti. Let’s not protect ourselves from the truth.
Posted by Maria Carroll at 11:03 AM