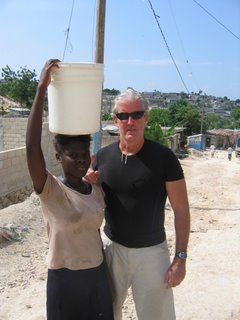 Today is Labor Day in the United States. Haiti has more than its share of holidays—Ancestors Day anyone?—but people who are lucky enough to have a job, don’t get off the first Monday in September day. Haiti’s unemployment rate is high, by some estimates 80 percent. This is only accurate if we consider paid employment. For in fact, the average Haitian without a job has to labor very hard just to survive. Getting water can require people to walk several miles a day carrying heavy containers. I think that’s one of the secrets of being poor: it is hard work.

I am re-reading “Down and Out in Paris and London" by George Orwell. Here is his description of tumbling temporarily into the suburbs of the poor.

“You thought it would be quite simple; it is extraordinary complicated. You thought it would be terrible; it is merely squalid and boring. It is the peculiar lowness of poverty that you discover first; the shifts that it puts you to, the complicated meanness, the crust-wiping. . . Your linen gets filthy, and you run out of soap and razor-blades. . . .You discover what it is like to be hungry. . . you go out and look into the shop windows. Everywhere there is food insulting you in huge wasteful piles; whole dead pigs, baskets of hot loaves, great yellow blocks of butter, strings of sausages, mountains of potatoes, vast Gruyère cheese like grindstones. . . [Poverty] annihilates the future. . . When you have only three francs, you are quite indifferent; for three francs will feed you till to-morrow, and you cannot think further than that. . . You think vaguely, ‘I shall be starving in a day or two—shocking isn’t it?’”

The people in Haiti know a different magnitude of poverty than the one Orwell is describing, but there are similarities. Haiti is largely deforested, a natural disaster complicating a humanitarian one. There are many reasons for this. Of late, Haitians cut down trees, turn the wood into charcoal, and sell it. The rich fuel this practice as much as the poor, often preferring to have their food cooked over this charcoal. A couple of years ago, John and I passed by a shanty. Out in front sat several coffee tins full of this blackened wood charcoal for sale. As we looked at it, the man there said, “We know it is not good for the land to cut down the trees. But we need to feed our families.”
Posted by Maria Carroll at 11:14 AM

Your blog is fascinating, I've been reading since a friend of ours in Peoria told us about it a few weeks ago. We live in Joliet (Dr. Foy did my mothers valve replacement). My family and I visited H.I.S. Home the first week of Sept. Hal and Chris are amazing people. I see that Dr. Carroll performed lots of exams at H.I.S. Home this weekend. Keep up the great work!

Thanks for your kind words and encouragement. We are big Dr. Foy fans and also share your opinion of Chris and Hl.