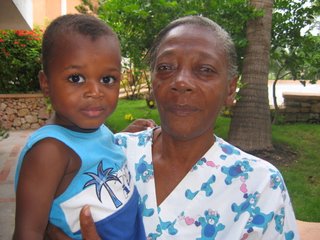 Can't you see how good this woman's soul is by looking at her eyes? Her name is Madame Therese (pronounced Thereze). She is a devout Catholic, who prays the Rosary at least four times a day. Actually, Madame Therese prays all day long--starting with kneeling by the side of her bed in the morning, giving thanks and praise to God for another day. She ends the day this way also. You can tell by her peaceful, warm presence that she spends a lot of time with God. You don't have to ask Madame Therese what the most important thing in her life is to know it's her faith. She walks to Sacre Coeur, her church in downtown Port-au-Prince. When Madame Therese received a gift of a rosary and a picture of Our Lady of Perpetual Help, Haiti's patron saint, she reacted as if she had been given silver and gold.

Madame Therese represents the rubric "poverty with dignity." By American, material standards, she is poor. But she has enough to eat, clothes to wear, a small home, and some education behind her. She speaks French as well as Creole. You can see this dignity in the neatness of her dress and her deliberate, graceful movements. People aren’t more valuable because they have more money.

Madame Therese says that the biggest problem in Haiti is that, "Haitians don't love each other." Certainly we have found that to be the case; many rich Haitians have nothing to do with the poor, and the poor are too busy fighting for survival to care for each other.

Madame Therese spent some time caring for the little boy she is holding in the picture. She would sit on the edge of the bed, watching him as he napped on his mattress on the floor. She laid sideways on the bed when she slept so that she could easily see him. She cared for him with kindness and gentleness, as if he was a temple for the Holy Spirit.

Madame Therese is 54. She looks older than this because life is hard in Haiti, even for those who aren't sick and starving. But her soul is fresh, lively, gleaming, eternal.

Madame Therese is what is good about Haiti.
Posted by Maria Carroll at 11:24 AM

I stumbled on your site doing research on saints - great story and picture - keep up the good work getting the word out.