When the Government Makes Problems Worse 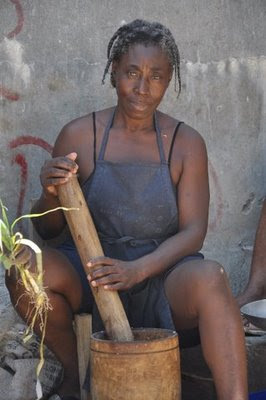 John wrote a great post at his blog, Dying in Haiti, an interview with Bob Moliere, an activist in Haiti.
Moliere says, "I ask you to tell the international community not to donate money and goods to government of Haiti. What goes in the right hand of the government quickly goes in the left hand and eventually makes its way back to the United States. . . . Haiti really has no government. There is no one to defend the poor. . . . When we (poor Haitians) need help, the Haitian government won't help. The people in Goniaves know this. International money did not reach the people in Gonaives after the flooding."
This reminds me of the argument that economist Dambisa Moyo made in her book Dead Aid that I wrote about here. Bob Moliere is making the same argument from the perspective of someone who is working with poor people.
Whenever we've talked with poor people in Haiti, they've outright laughed at the idea of the government helping them.
Haiti reminds me of a line in Bruce Springsteen's song, Born in the USA.
"You end up like a dog that's been beat too much 'til you spend half your life just covering up."
The historical and present day horrendously bad treatment that Haiti has received from the international community is part of the country's problem. But now Haiti's internal dysfunction is an equally big problem. Government corruption and incompetence are big parts of this dysfunction.
Posted by Maria Carroll at 11:04 PM

I really would not know how to begin in Haiti.....it seems as though a small few rule many in a very unjust way....The powers of the world have no interest in Haiti as it possesses no desired resources or strategic position....it is sad that the situation there gets no attention in the mainstream media outlets...Thank you for your work in getting some info out to us . From the deep South in the U.S...Emile . How do you begin to help this situation ?