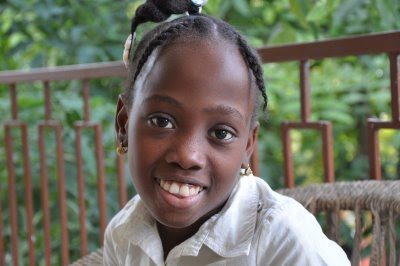 Hurray! Thirteen-year-old Katina has been accepted by a medical center in Ohio. This will be her second trip to the United States. Katina came to Peoria in 2002 and had her mitral valve repaired. Now this valve needs to be replaced.
Haitian Hearts has been monitoring Katina in Haiti for the past seven years. We know her particularly well because she spent eight months in Peoria when she was here in 2002. She is a sweet girl from a loving family who has been attending school regularly. The children and families from St. Thomas the Apostle Grade School in Peoria Heights helped financially support Katina's education and pay for other necessities.
Katina already has her Haitian passport so as soon as the paperwork from the United States goes to the U.S. consulate in Port-au-Prince and she is granted a visa, she will travel to Ohio. We are thrilled that she is getting this opportunity to have her heart fixed for good!
Posted by Maria Carroll at 10:43 AM

We're praying for Katina and her family and all those who are helping her.