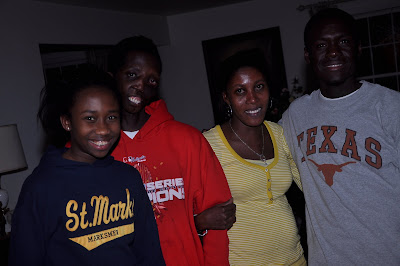 There were Haitians in the house last night--five of them. I loved hearing their laughter and their Creole; it was like a party. Haitian Creole (or Kreyol) is one of two official languages in Haiti, the other being French. Not everyone in Haiti speaks French but everybody speaks Creole.

I remember reading a fascinating account of how these Creole languages evolve. Here's what I remember as it applies to Haiti. When slaves were brought from West and Central Africa, they spoke different tribal languages. Not only could they not initially understand the French, they often couldn't communicate with each other.

The slaves began learning a rudimentary French so that they could understand the slave masters and talk with each other. The first version of this language was called pidgin; it was no one's native language. The next generation of speakers makes this language their own and it develops into a more sophisticated creole language. In the case of Haiti, much of the vocabulary comes from French while the grammar more closely follows the African languages. As a written language, the words in Haitian Creole are spelled phonetically. For example, "yes" which is written "oui" in French is written "wi" in Creole. Makes more sense, don't you think?

We had a houseful of Haitians because three young people came to visit Heurese and after a few months in the United States, I know she enjoyed hearing Creole spoken by Haitians. The youngest Haitian, our son Luke, slept right through it