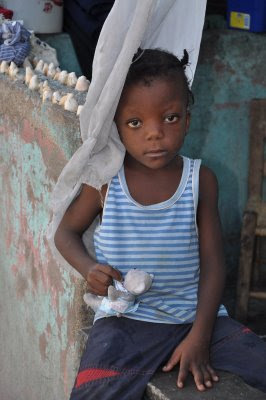 Sometiemes when we've been in Haiti in a clinic, the waiting room overflowing with sick and poor children, I want to scream, "Why doesn't the world do something?" Why is it that the suffering children of the world don't command our attention, our compassion, our action?
Calm-headed sages might take me aside and say, "Maria, fixing this problem just isn't so simple." How do you go about making life better for these children? To use a hospital analogy: if sick poor children are the patient it seems the disease requires both the emergency room and long term chemotherapy.
Aid from the developed world is one of the accepted solutions to developing world poverty. Well, not according to Dambisa Moyo, a Zambian-born economist with a book coming out called, Dead Aid. In this interview in the NY Times, when asked what she thinks has held back Africans, Moyo responds,
I believe it’s largely aid. You get the corruption — historically, leaders have stolen the money without penalty — and you get the dependency, which kills entrepreneurship. You also disenfranchise African citizens, because the government is beholden to foreign donors and not accountable to its people.
She believes that things like capitalism, microfinancing, small businesses are the way to change a country as she says is happening in China.
Perhaps she's right and this is a better solution. In any case, how many children will have to die before things change?
Posted by Maria Carroll at 7:59 AM