Is the United States Racist? 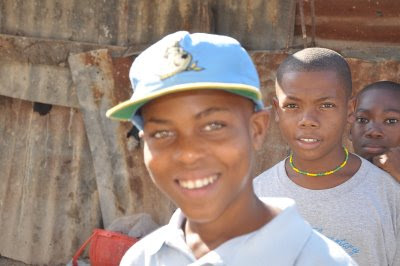 I'm in Florida today, which is as close as I'm going to get to Haiti for awhile. It's a good time to contemplate a couple of things about Haitians who reside in the United States. First of all, there are close to 1,000,000 of them. This group of people is referred to as the Haitian diaspora.
When I think about how Haiti manages to remain even a little bit functional, I, and others, come to the conclusion that it is because of the estimated $1.2 billion that Haitians in the United States send back to their families in Haiti. These remittances total one-third of the Haitian economy.
TPS, or Temporary Protected Status, is the second thing to contemplate regarding Haitians in the States. According to the U.S. Citizenship and Immigration Services website, TPS can be granted by the U.S. government to people from countries that are experiencing "ongoing armed conflict, an environmental disaster, or other extraordinary and temporary conditions." Before he left office, President George W. Bush extended TPS for the citizens from El Salvador, Honduras, Guatemala, and Nicaragua.
Wouldn't you think that given Haiti's four back-to-back hurricanes in 2008, on top of a whole lot of other problems, that its citizens might qualify for TPS? Haitians might qualify, but they weren't granted TPS.
Why? Given the other nationals that we've extended TPS to, there is no credible answer to this question. Haiti definitely has suffered from repeated "environmental disasters." If you worry that granting TPS to Haitians would causes masses of them to sail for Florida, recent history refutes this. According to the Miami Herald, in the 1990's, the Clinton administration allowed 50,000 Haitians to stay in the country; there was no big deluge of immigrants.
Really, if you look at all the evidence, the only conclusion you can come to is that Haitians are denied TPS because of racism.
There is no other answer, and I take it personally.

Posted by Maria Carroll at 8:10 PM