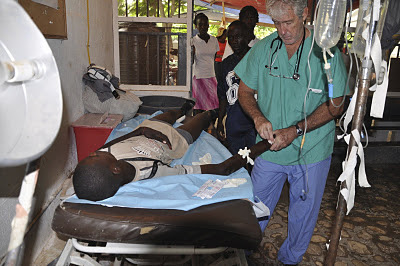 I heard on the radio this morning that Michel Martelly, president of Haiti, has made today, January 12, the second anniversary of the earthquake, a holiday.
Also today, my husband John is making his way from Les Cayes to Pestel, a remote town on the north coast of Haiti's southern peninsula. Cholera is hitting the Pestel area hard, including in the difficult to reach mountains surrounding the town. A recent report stated that 55 people have recently died of cholera in this area and that there may be more than 300 cases. Because of the difficulties of data collection in Haiti, the numbers are probably underreported.
John will work with cholera patients. He is also going to gather information for public health officials working in the U.S. and Haiti who are trying to limit the deadliness of the cholera epidemic.
Perhaps the best way to commemorate the lives of those who died in the earthquake is to try to help save the lives of those who are suffering from this new disaster.
Pictured above, John working at a Cholera Treatment Center in 2011.
Posted by Maria Carroll at 2:17 PM

Thank you Dr. Carroll for your work with the Haitian people, and Maria for your blogs.