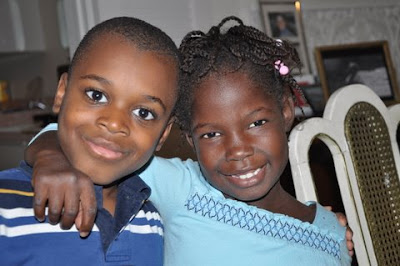 On the day of this terrible anniversary, I am happy to report some good news about a Haitian. After a six year odyssey, seven-year-old Widnerlande was last week granted a visa by the US embassy in Port-au-Prince and arrived in Miami yesterday. In keeping with the obstacles that have hampered this entire process, of course, the flight to Chicago was cancelled yesterday. However and hooray, the flight actually landed early today and we were at O'Hare to greet Widnerlande as the American Airlines employee pushed her in a wheelchair to the baggage area. We owe grant thanks to Gertrude and Rachel in Haiti who were instrumental in getting Widnerlande a visa and Joanna, who accompanied Widnerlande from Haiti to Chicago.

Our lovely Haitian patient arrived in Illinois on the one year anniversary of the earthquake. And now the American portion of the journey begins!
Posted by Maria Carroll at 10:31 PM

You and dr John are wonderful people.good picture!