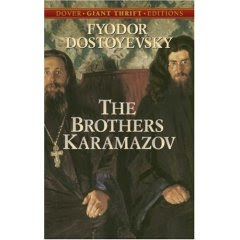 Here’s some amazing trivia about The Brothers Karamazov by Fyodor Dostoevsky: it’s reputed to be Laura Bush’s favorite book. I don’t find it incredible the TBK would be the top book choice for someone. It’s a highly readable Russian epic that considers the spiritual questions and struggles that confront us no matter when and where we live. But I do find it amazing that that someone would be married to George W. Bush or as Garrison Keillor calls him the Current Occupant. But so she is, and we have yet another enigma to puzzle over regarding the First Couple.

I was first assigned to read TBK in graduate school. Sadly for me, I was only able to read about two thirds of it before the next wave of reading assignments hit. This time, I read a little more than 20 pages a day—a nice, thoughtful pace for a great book—and finished the 735 page book in about a month. TBK is about the relationships of three—possibly four—brothers with each other and their neglectful, sly, buffoonish father. Without giving away the plot, here are some comments about the book.

Dostoevsky is a master at creating characters and he has an appreciation of the complicated nature of human beings. Each of the brothers—the crass and impulsive Dmitri, the reserved, intellectual Ivan, and the saintly, kind Alyosha—seems complex and real. Their characters, along with Fyodor’s, their father, drive the plot, including the crime that is committed and its aftermath. I think Alyosha, who is non-judgmental and tries to see the best in everyone, is my favorite heroic character. Faith and doubt and what they mean for the world play out in the beliefs and actions of these main characters.

The most famous chapter of the book is “The Grand Inquistor.” Ivan describes his poem about what happens when Jesus comes down to earth during the Inquisition to his faith-filled brother Alyosha, who wants to become a monk. I find the preceding chapter, “Rebellion” more disquieting. Ivan graphically describes the suffering of children and asks, in effect, how can this be? A lack of a satisfying answer has convinced Ivan that there can be no God. By the way, in Dostoevsky’s notes he writes that all the horrifying examples that Ivan described actually occurred.

This chapter, of course, reminds me of Haiti, where we see so many suffering children and we constantly ask ourselves why we weren’t born here, why we’ve escaped this misery. One of the brands of misery is named TB and a child in TBK dies of the wasting disease as so many people did prior to the middle of the 20th century. Here is a line from the speech that Alyosha makes at the boy’s grave site.

“Ah, children, ah, dear friends, don’t be afraid of life! How good life is when one does something good and just!”
Posted by Maria Carroll at 11:14 PM