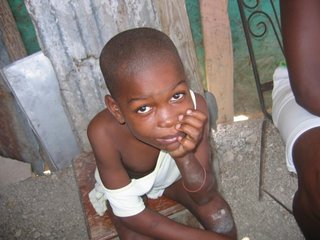 On Sunday we went to a pizza party. Our friend Mary, who works at the Missionaries of Charity—Mother Teresa’s sisters—home for the dying in Bel Air, invited some children from the Sisters’ home for children who are sick to the guest house where she stays for pizza and ice cream after Mass. She invited us as well.

About 11:30, Mary and her visiting friend Dee, drove to the children’s home and picked up about 15 kids whom the Sisters had selected to attend the party. These youngsters ranged in age from about four to ten. Some of the children are sick and some are living at the home because their parents cannot afford to take care of them. I asked Mary about one little boy about six who had a bloated abdomen and almost no waist. “He has AIDS,” she told me. A four-year-old boy was blind, though this did not keep him from scarfing down his share of Dominoes Pizza. Yes, there is a Dominoes in Port-au-Prince, two actually. It is the only American fast food chain I have ever heard of in Haiti. An 8-year-old girl was deaf and mute.

All of the kids were still dressed in their church clothes: frilly pink dresses for the girls, yellow shirts and dark pants for the boys. They nibbled on appetizers of cheese curls. Pretty soon the doorbell rang, just like at home, and Mary walked in with eight boxes of pepperoni pizza. The kids got as much pizza as they could eat along with Coke and Couronne cola, a sickly sweet yellow-orange fruit soda.

A 3-year-old boy we have a special interest in sat next to a 9-year-old girl, who shared her soda pop with him. This boy is used to swiping food off other children’s plates, so the sharing is a revelation. Not to have to compete with other children for food and attention: Mon Dieu! What a world! John sat next to the blind boy. “He was very interested in the pizza,” John said. “He had no problem locating it and eating it.”

Mary told us a story about a handsome 8-year-old boy at the party. He came to live with the Sisters because he was sick, but after he was better, his parents did not return for him, which is frequently the case. The Sisters had found an adoptive family for the boy, but he didn’t want to be adopted; he wanted to live with his mom and dad. A staff member and the boy went to the boy’s town to search for his family. They searched and they searched, but couldn’t locate them. The staff member said, “We can’t find them. We have to go back to the Sisters’” The boy said, “Let’s look for a little while longer.” Heartbreaking.

The kids burned off their lunch by running laps around the house in a giggling herd with the 3-year-old leading the way. The older girls would haul him up the five stairs on either side of the house. It was like watching the running of the bulls in Spain: an exuberant stampede of childhood joy. No one was smiling more broadly then the 3-year-old. What fun to play with the children!

We have come to know up close how much potential these children have. The smarts and athleticism and creativity and spunk and personality they possess stand out in bold relief against the depravity of their environment. These children are descended from some of the toughest people on earth: those who defeated Napoleon and established the first republic via a slave rebellion. We can see in all these children gifts that their environment doesn’t always nurture or allow them to exercise. It’s a loss for the kids but also a loss for the world because we need them.

After the running around, Mary served vanilla, strawberry, and chocolate ice cream, as much as everyone wanted. It was the end of a very good party.

The young man in the picture wasn't at the pizza party, but he too, has a lot of potential.
Posted by Maria Carroll at 10:38 PM