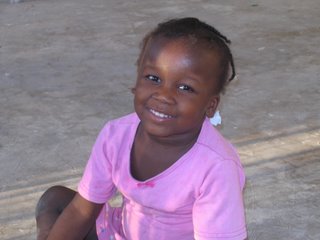 Transitioning from One World to Another:

For me, the worst part of our trips to Haiti is that at some point in traveling we have to get up in what seems to be the middle of the night and with bleary eyes rush off to some airport. It feels so horribly wrong, like being plunked down in frozen tundra wearing only our undies: something is missing, in our case sleep and the sun. On the morning of this trip, I woke up two minutes before our alarm was set to go off, mysteriously jerked awake from a vivid dream. I had been batting a beach ball to small groups of people, single-handedly keeping the ball in the air, while trying to engage the other people in playing. When I relayed the dream to John, he told me Marie was the beach ball.

Marie is the 4-year-old we are escorting back to Haiti. She had successful heart surgery at St. Louis Children’s Hospital and, after a three month stay in the States, is going home. We left from St. Louis for Haiti via Miami. Marie could not have made the trip easier, though the same can not be said of the airlines.

At first Marie didn’t want to leave her host parents to come with us, but as we were walking to the gate, I said, “Marie, ou ap veni avek Dr. John e mwen.”—Marie, you are coming with Dr. John and me—and she nodded. “This is good,” I thought. But Marie didn’t realize that Jim and Jane, her host parents, wouldn’t be coming along, too. So when Jane handed her to me, Marie started to cry. But it only lasted about 10 seconds as we wound our way through the security line. We had beaucoup carry-ons: a large backpack, a suitcase on wheels, two computer bags with laptops, and Marie’s little backpack. The security agents helped us put our stuff on the conveyer belt, and we got to our gate, C10, with 20 minutes to spare.

Marie sat in our laps, played, ate her snacks and asked, “What?” a lot. It’s amazing how much English she has learned, calling to John, “Wait a minute!” if he got ahead of us walking through the terminal. Our two and a half hour flight to Miami was fine, but once in Miami, we faced a two hour delay and a gate change. As we waited, we ate delicious Cuban sandwiches stuffed with ham, pork, and Swiss cheese.

A sign at the Miami airport reads: “Behind this wall, we are building the future Miami International Airport.” I certainly hope so. Besides its frivolous deficiencies, like not enough restaurants, the Miami airport forces travelers to walk cross country distances to get through customs and to the various gates. Our flight was switched from Concourse A to Concourse C. We walked for 20 minutes to get to our new gate. After we had been walking for 10 minutes, we saw signs that said Concourse E is 16 minutes away. You can walk a mile in 16 minutes!

The flight to Port-au-Prince was fine. Marie fell asleep, leaning against the side of a fellow passenger, who didn’t seem to mind. We were the only plane being unloaded on the windy tarmac of the Touissaint L’Overture International Airport, so we got through customs and claimed our luggage quickly.

Marie is returning to an orphanage where she has lived for the past year and a half. Prior to this, she lived with her grandmother. When her heart problem—Tetralogy of Fallot—was diagnosed, the grandmother placed her in the orphanage so that she could get better nutrition as she waited to be accepted by a U.S. hospital for surgery. My mind is a little eased that we are returning Marie to this place, with its three meals a day, clean water, and schooling, rather than a poor Haitian home. A worker from the orphanage and a teenaged Haitian Hearts patient who also lives at the orphanage are waiting for us. We get into the battered, blue SUV and drive off. They drop us off first. Little Marie climbs in the front seat—no car seats or often seatbelts in Haiti—for the last leg of her journey.
Posted by Maria Carroll at 7:23 PM