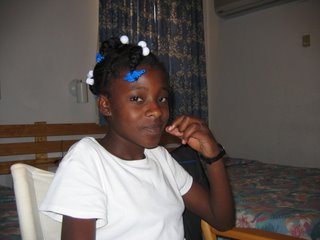 Fastina is with us. When we went to the orphanage on Saturday, she tap tapped and walked down the mountain with her mother. Very slowly, as she was in atrial fib and needed to lean on her mother for support. Her heart rate was 150 and her right lung sounded socked in with fluid. So we decided the best course of action was to have her come with us and stay until our flight on Thursday. John can monitor, give her meds, and she will get good food to eat.

“Fastina is like a female Willy,” said John. This is big praise as Willy another Haitian Hearts patient, is one of the most gentle, likeable souls around. There is something angelic about him. I am convinced that he’s been to heaven. Several years ago he was so sick and in intensive care for five months. Who knows? Like Willy, Fastina has a shy, beautiful smile. She is quiet and low maintenance, content to watch television in the cool, dark cocoon that is our room. Today her mom dropped off more clothes for her, and she washed the outfit she had been wearing in the sink.

We fed Fastina watermelon, pineapple, banana, and papaya—John wanted her to have the last two potassium-rich fruits to replace all that she is losing with the diuretics—pizza and French fries. While we were eating, I conducted a little social history interview with Fastina. She is 13 and has two brothers, 18 and 11. When I asked her if she had any sisters, she said her sister was dead. We didn’t know about this. Seven years ago, Fastina’s 9-year-old sister, Melissa, became ill in the stomach—John’s guessing typhoid fever or appendicitis—and after three days of sickness, she died. Scratch the surface of almost any Haitian family and you find a dead child.

When Fastina’s mother came this morning, she brought three relatives with her. When they left, Fastina cried. She doesn’t know how long it will be before she sees them again. In some ways Fastina is lucky. Most kids in the developing world who have hearts damaged by rheumatic fever die. But she is facing a big trip to live among strangers in a different culture, where she will have her chest split open in a dangerous operation. Sound like fun, doesn’t it?

The end result will be worth it, though. Fastina is worth it.
Posted by Maria Carroll at 7:52 PM