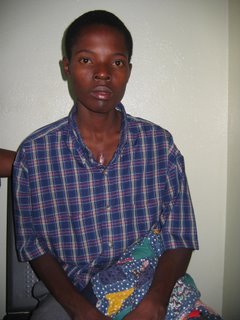 Things don’t always turn out the way we hoped for, worked for, prayed for, wanted. Isn’t that one of the hard lessons of life? Jackson died this morning. As one of his doctors said, “It is heartbreaking.” For so many reasons.

Independent of his severe heart problem, Jackson had a hard life. His father was murdered, his mother lost two other sons, one as an infant and the other as a young adult to sickle cell. And yet Jackson received blessings too. In 2002, he came to the United States and had his health temporarily restored. He knew he was loved by his own family—his mother and sister carried him to us on December 1—and his American families. These people hosted him in their home, where he became part of the family, sent letters and money to Jackson, visited him here in Cleveland, prayed for him.

Perhaps it was all the love, in the face of cruel poverty, that gave Jackson such a strong will to live. I believe he kept himself alive until John arrived in Haiti, kept going and even improved during the four weeks he was with us in Haiti, and until a day ago was able to tolerate all the testing and waiting involved in preparing for major heart surgery, all with a heart, that an echo technician in Cleveland said, “does not appear compatible with life.”

The last two days of Jackson’s life, his health significantly deteriorated. Prior to this, it had been a struggle to control the volume of fluid in his body: too much fluid, and his liver became impaired. Too little, and his kidneys didn’t get the blood they needed to function. Balance is so important to health; this last imbalance required Jackson to go on dialysis and back to intensive care, where after a final interventional procedure, he died. While he was awaiting this procedure, four nurses from another floor where Jackson had been came down to visit him, a gesture typical of the caring shown by the Cleveland Clinic employees.

Many times while at the Clinic, Jackson’s experience and suffering reminded us of Jesus Christ. Our niece Jennifer and John saw Jackson get his feet washed by an aide. As she gently rubbed lotion over his heels and toes, she told him how nice his feet were, feet that for much of his life in Haiti didn’t have the benefit of shoes. Yesterday, John held wetted gauze to Jackson’s parched mouth and lips to give him a little moisture. After the last procedure, we sat in a waiting area and through a screened window, watched the silhouette of Jackson on a stretcher, attached to several machines, be wheeled slowly, almost reverently, down a hallway, accompanied by the interventional team. “It looks like a processional,” said our friend Mary who waited with us.

The hospital will do an autopsy, which will likely pinpoint the cause of death. But we don’t really need an autopsy to know why Jackson died. He died because of poverty. When he was ten, he got strep throat but not the few pennies worth of antibiotics needed to treat it. The people of Haiti lack so much: sanitation, clean water, food, education, money, a health care delivery system. There are few places to go to get medicine and little money to buy it. So, Jackson’s strep developed into rheumatic fever, and it ravaged his heart valves.

We live in a world with billions of poor people like Jackson. Therefore, I submit to you that we live in a world constructed in a fundamentally unfair way, which results in a few of us having way too much and others having far too little. For those of us in the too much camp, we should feel profound unease, not just for its own sake, but to spur us to action. Today I don’t have political/economic reform to suggest, though I think this has to happen. Today I’ll suggest personal reforms: that people like Jackson somehow have to be more of a priority in our lives and that we need to examine ourselves for ways in which we perpetuate the injustice. Change can be difficult and uncomfortable, but here’s the carrot: in making the world a better place, we can make our own lives better, too.

For today, we are sad and questioning. Given the somewhat miraculous events that occurred to get Jackson to Cleveland Clinic, it is hard to accept that he died. Perhaps we Americans are the ultimate “happy ending” people. We don’t like death. It’s the ultimate defeat.

Dr. Paul Farmer, a doctor who works in Haiti and other poor countries, has coined a phrase “fighting the long defeat.” When you ally yourself with the poor, he explains, you’re allying yourselves with the world’s losers and you can expect many defeats. You get a victory now and then, but overall, it’s mainly defeat. However, being with the poor, helping them, is the right thing to do, and so you fight the long defeat. The flipside of this philosophy is contained in a line from King King, which Jennifer and I saw the other day: Defeat is only momentary. I think defeat is somehow both long and momentary. Jackson's life, ending at age of 21, can be viewed as a long defeat, and in many ways it was. But there were transcendent moments of victory, too.
Though Jackson died, we are thankful that he was given some hope and that he knew how much people loved him. He had the opportunity to receive good medical care. We learned much from him—how precious life is and how to persevere in seemingly impossible circumstances. We will follow Jackson's example: we won't give up.

Jackson always comported himself with dignity. He wanted to be able to attend to his own needs, and it was difficult for him when he could not. His quiet strength and his determination to do the best and the most that he could each moment were humbling.

We love him and we miss him.
Posted by Maria Carroll at 7:17 PM

Sad and questioning; always, always at early death. Great comfort to me, to paraphrase: His soul did magnify the Lord.

His meaning lives on in the hearts of others. His existence has therefore not ended.

Thanks for these words. We wish more could have been done for Jackson through his life. You're right: Jackson made God very present to us.