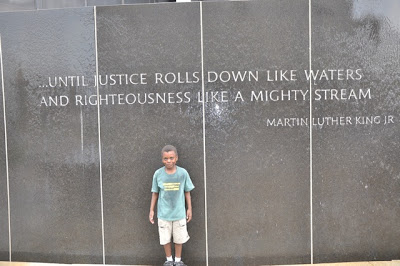 For the past few days, John, Luke, and I have been traveling to see some of the Civil Rights sites in Alabama. In Birmingham, we toured the Civil Rights Institute and saw the 16th Street Baptist Church, where four little girls were killed in an explosion detonated by white racists. We walked the streets around Kelly Ingram Park where black adults and children who were peacefully marching and demonstrating were attacked by dogs and fire hoses.

In Montgomery, we went to the Rosa Parks Museum. She was the seamstress who in 1955 wouldn't give up her seat on the bus to a white man. Her arrest launched the Montgomery Bus Boycott which began the modern day Civil Rights movement. We toured the Dexter Avenue King Memorial Baptist Church, where Dr. Martin Luther King, Jr was pastor from 1954-1960. In Montgomery, King's home was bombed with his wife and baby girl in it.

I have to hand it to the people of Alabama; it takes a certain amount of humility to make two huge and long lasting mistakes of your history (slavery/Civil war and racism/Jim Crow laws) the basis of much of your tourism. Visiting these sacred national shrines has been an education and one that I keep trying to apply to Haiti. I think part of the difficulty for Haiti is there are so many problems and the foes are many: a long history of the international community meddling in a destructive fashion in the affairs of Haiti; a corrupt, incompetent government; rich Haitians who have a vested interest in things remaining the same; natural disasters of Biblical proportion.
In Alabama and throughout the south in the 50's and 60's, through all the insults, harassment, attacks, and killings, King and other movement leaders, like the unsung Rev. Fred Shuttlesworth of Birmingham, insisted that these awful sins be met with nonviolence and love. It is amazing to learn about the devotion and bravery of the people in the Civil Rights movement. They had no real reason to think they would succeed anytime soon. Of course we know now that in large ways they did, but it wasn't a foregone conclusion, it wasn't inevitable. History always seems much neater than the messy present.

Perhaps this messiness and the peculiar paradox of American history can best be illustrated by the fact that the Alabama Capitol, where Jefferson Davis was inaugurated president of the Confederacy, and the Dexter Avenue King Memorial Baptist Church, where the Civil Rights movement began in the meetings to plan the bus boycott, are a block away. You can stand on the porch of the church and look up at the domed capitol. Yes, Montgomery is both the cradle of the Confederacy and the cradle of the Civil Rights movement. Welcome to America.
Posted by Maria Carroll at 11:06 PM

Great blog love all the pictures and posts! Thank you for sharing!

There is no doubt that the United States of America has a tarnished history. Sometimes we don't read enough into our history, sometimes we read too much into our history. Regardless, it is so important for the current generation to understand the past. I pray that we can all learn from our experiences to make the United States of America a better place to live.