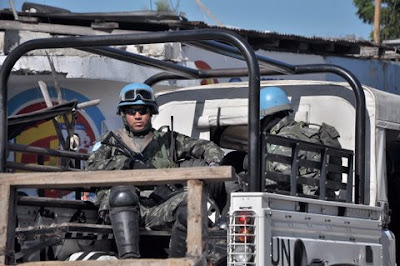 I know that in my last post I said that the next post--this post--would be about the problems of a (non) functioning government in Haiti. But in the meantime, the AP ran an article about the source of the cholera in Haiti. I won't reprint the entire article, but here are some excerpts:

A cholera outbreak that has killed more than 300 people in Haiti matches strains commonly found in South Asia, the U.S. Centers for Disease Control and Prevention said Monday.

The finding intensifies scrutiny on a U.N. base above a tributary to the Artibonite River that is home to a contingent of recently arrived peacekeepers from Nepal, a South Asian country where cholera is endemic and which saw outbreaks this summer.

The Associated Press found questionable sanitation conditions in an unannounced visit to the base last week and an exclusive tour of the facility given by peacekeepers Sunday. The U.N. defends its sanitation practices and has repeatedly denied it was a source of the infection. The peacekeeping mission said officials were looking into the matter Monday following the announcement.

The AP visited the base last Wednesday to follow up on a statement by the mission that its sanitation measures met U.S. and U.N. standards. The area between the base and the river reeked of human waste. Several pipes were leaking, including a broken plastic pipe emitting a foul-smelling black liquid near what the soldiers identified as latrines. The dump site for the waste was a few hundred yards (meters) away in shallow, shovel-dug pits, next to several homes. Neighbors said the pits often overflow and run to the river, and they stopped drinking from the river and sought fresh water uphill.

Okay, so we don't know for certain if the cholera came from the UN forces. But it seems like this is a likely possibility. One of the mysteries of the outbreak is where the bacteria came from as cholera is not endemic to Haiti. We now have at least a hypothesis.
So if the cholera is coming from the troops, it would mean that the UN forces who are in Haiti as peacekeepers. to protect Haitians-though many living there would say that the UN troops make Haiti a more dangerous place--have spread a deadly disease because they did not properly dispose of their waste. The deadliness overwhelms the irony.