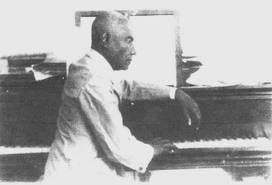 This past Friday we attended a piano concert at Bradley University's Dingledine Music Center. Pianist Joshua Russell played pieces composed by Haitian pianist and composer Ludovic Lamothe, pictured above.
The concert was a revelation. I didn't know that Haiti had a tradition of classical music. The music was energetic and full of surprises. Russell, who teaches at Bradley and who has taught music in Haiti and did his doctoral dissertation on Lamothe, described hearing a recording of Lamothe's playing as life changing. He said that even though the compositions were all written, Lamothe sounded as if he was inprovising, playing with a captivating freedom. Russell has recently released a CD of Lamothe's music called Valses to Voodoo.
In Lamothe's compositions, one can hear the influences of Haitian folk music, the rhythms of voodou drums, Latin American rhythms, and the music of Frederic Chopin. Lamothe was sometimes referred to as the black Chopin.
It's impossible to convey the magic of music in words, but if you want to learn more about Joshua Russell's interpretation of Lamothe's music, check out his website.
Posted by Maria Carroll at 9:10 PM