Pearl of the Antilles? 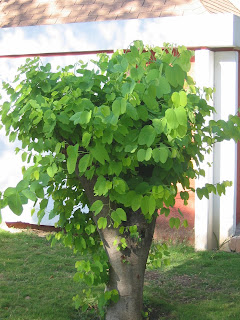 Haiti was once known by the above title, though it may be difficult to believe today. The island, which was once lush and forested is now largely barren. However, the conditions that created such a fertile country still exist, as evidence by the these pictures, which were taken only a few weeks apart. If given the chance, stuff likes to grow in Haiti.

I’ve spent a few posts describing Haiti’s troubled history and the problems it faces. I would like to spend one entry listing the strengths of the country.

-The weather in Haiti is fabulous. FAB-U-LOUS. We have been here for seven months now. Locals had told us that December, January, and February are beautiful months in Haiti and we are finding out how right they are, especially given the temps in Illinois. The days are sunny and warm, but not oppressively so; we don’t run the air conditioning at night. There is little or light rain. Nice breezes from the Caribbean help cool the island, even during the hotter summer months.

-The people in Haiti are resilient. The living conditions for poor people here are wretched, for reasons detailed in the previous post. Though the infant and maternal mortality rates and the average lifespan of Haitians are all atrocious, they are not as bad as the might be. Many of the African countries have much worse mortality rates, and I find it hard to believe that conditions, bad as they are there, are as poor as in Haiti. Haitians are descended from some very tough people: the slaves who defeated Napoleon’s army.

-The people in Haiti are hospitable. We have been extended such kindnesses from Haitians who are very poor. We have visited people in their shanty homes who have had cold Cokes waiting for us. They will also offer you the only chair in their house.

-The people in Haiti are largely law abiding. You read, and I’ve discussed the gang-related crime in Haiti. However, gang members comprise a very small part of the population. By and large, the people in Haiti are peace-loving. We have traveled around Port-au-Prince on public transportation—i.e. tap taps—extensively and never felt threatened or in danger. I believe the United States to be a much more violent country than Haiti, and I think the crime statistics would bear this out.

-The people in Haiti are hard working. As George Orwell said in Down and Out in Paris in London, the unpoor don’t realize how much work it is to be poor. From walking miles for water to washing clothes by hand to fixing cars wherever they break down, Haitians are usually working.

-The people in Haiti want democracy. Despite the failure of past governments and the hardships of getting to the polls and then waiting there often for hours, the Haitian people turn out in huge numbers for the presidential elections. They want to have a voice in choosing their officials.

-The people in Haiti are good cooks. This is rather a painful paradox, given the scarcity of food in many Haitian homes. But we have had delicious meals here prepared by people from all different income levels.

-There is a ton of potential in Haiti, if it can only be channeled. This is a country of 8 million people, many of whom would love the opportunity of a job. People here want a better life and are willing to work for it.

As you can see, most of the strengths of Haiti are bound up in its people.
Posted by Maria Carroll at 9:32 PM

Maria--thanks for describing so beautifully how we all feel about Haiti and the people we've met there. In spite of the concerns for our safety, we are starting to count the days until we can return to the place we've come to love.

There will be a few people from our Church who will be there for the first time in March. It will be nice to have other people to share this with and who, by experiencing it, will understand what we mean when we say how hard it is to leave there. It doesn't make sense--it just is.

Anyway, thanks again for reminding us of the many positive and beautiful things about Haiti.

A group of us will be coming at the end of April and if you're still there, would like to meet you and thank you in person for writing this blog and keeping us in touch with Haiti.

Thanks again for your encouraging comments. We are thinking that we will be returning to Illinois this month as we are close to completing our adoption. But, hopefully, we can meet one day.

I will continue to post while we're in Haiti and I try to post on Haiti-related topics when I'm at home.

wonderful!!! Thank you for shining light on a country marked with media darkness