"Team of Rivals: The Political Genuis of Abraham Lincoln" 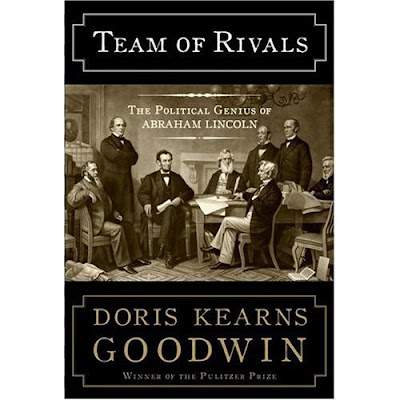 I've loved everything I've read by Doris Kearns Goodwin from the Kennedys and the Fitzgeralds to No Ordinary Life about Franklin and Eleanor Roosevelt during WWII. Team of Rivals is no exception. Kearns latest tells the story of Lincoln's life through the prism of politics. Her depiction of Lincoln's rise as a politician willing to forgive his friends and enemies to a president who includes his talented rivals in his cabinet is a portrait of the temperament ideal and necessary to lead the country through the devastating Civil War.

Most fascinating to me was Lincoln's progression from a poor young man to an influential Illinois pol. He had to overcome disadvantage that his more privileged rivals--William Seward, Edwin Stanton, Edward Bates, and Salmon Chase--never dreamed of. Lincoln had the magnamity to appoint Stanton as the Secretary of War, even though six years earlier, Stanton had cruelly snubbed Lincoln, even referring to him as a gorilla. Stanton worked like a dog as the Secretary, though, and came to love Lincoln.

As in Haiti, children of the 19th century die frequently and early. The Lincolns didn't escape this scourge. Abraham and Mary Lincoln lost three of their four boys: Edward, 2, to tuberculosis in Springfield, Willie, the favorite child,11, to typhoid fever during some of the darkest days of the war, and Tad at 18, from "compression of the heart," likely caused from TB. Thousands in Haiti die of these diseases today; both are curable with antibiotics.

The book also describes Lincoln's connection with Peoria and other parts of central Illinois. In his great Peoria speech, in which the future president spoke opposite Stephen Douglas in support of keeping slavery out of Nebraska, "Lincoln implored his audience to re-adopt the Declaration of Independence (which stated famously that all men are created equal) and 'return slavery to the position our fathers gave it; and there let it rest in peace.'"

I wrote an op-ed about turning 40 that appeared in the Peoria Journal Star. In it, I quoted a stanza from one of Lincoln's favorite poems, "Mortality," by William Knox. Kearns includes the same stanza in Rivals. With death all around him, Lincoln became preoccupied with the subject as the content of the poem indicates:

Oh! Why should the spirit of mortal be proud?
Like a swift-fleeting meteor, a fast-flying cloud,
A flash of lightning, a break of the wave,
He passeth from life to his rest in the grave.

The older one gets, the truer those words become.

Kearns peppers her account with many of the amusing and illuminating stories that Lincoln told to emphasize his points. When Lincoln was making his historic journey to Richmond, the capital of the Confederacy that was now in Union hands, the president was forced to transfer from a ship to a barge to a row boat, due to torpedoes and other debris in the water. The military men were nervous and chagrined, but not the president. "The situation reminded him, he cheerfully noted, of a man who had approached him seeking a high position as a consulate minister: 'Finding he could not get that, he came down to some more modest position. Finally he asked to be made a tide-waiter. When he saw he could not get that, he asked me for an old pair of trousers. But it is well to be humble.'"

Finally, a piece of timeless wisdom from the timeless sage: While the disastrous battle of Bull Run was going on, Lincoln took the time to write a cadet who was miserable at West Point and was contemplating quitting. "'Allow me to assure you it is a perfect certainty that you will, very soon, feel better--quite happy--if you only stick to the resolution you have taken to procure a military education. I am older than you, have felt badly myself, and know, what I tell you is true. Adhere to your purpose and you will soon feel as well as you ever did. On the contrary if you falter, and give up, you will lose the power of keeping any resolution, and will regret it all your life.'"

This little blog review can't do Lincoln or Ms. Kearns' book justice. My advice to you is to read the book.
Posted by Maria Carroll at 12:02 PM