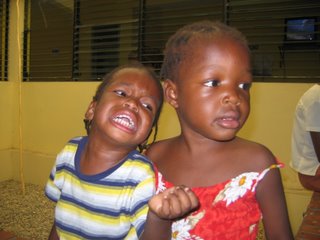 A couple of weeks ago, we had lunch at the Hotel Montana, a fancy-schmancy place that overlooks Port-au-Prince. We met Dr. Gretchen Berggren, a U.S., Harvard-affiliated physician who Paul Farmer called the Mother Superior of public health in Haiti. She and her husband have worked decades in Haiti, trying to eliminate maternal tetanus and a host of other childhood diseases. They began their work in Haiti at Hopital Albert Schweitzer in Deschapelles, a hospital where John spent four months working in the nineties.

As part of their work, they collected demographic and health information on people in the areas they studied. They would then try to implement commonsense health procedures, like pregnant women having a birth plan. When women have a plan, they are less likely to deliver at home

After meeting her and hearing a little about their work, I asked Dr. Berggren what the number one public health problem in Haiti is. “Malnutrition in children under five,” she responded without hesitation. She went onto explain that a lot of deaths from diarrhea and pneumonia were actually caused by malnutrition as children were too weak to fight the illnesses.

It was a little bizarre talking about starving children in a gran manje place like the Hotel Montana. Gran manje literally translates as “big eater.” It is a derogatory term for the elite in Haiti, particularly the elite who don’t care much about the poor people who surround them. They are big eaters in a land where food is scarce but bizarre experiences aren't.

John saw the children pictured above at the clinic. They both suffer from malnutrition and also possibly tuberculosis. I have fantasies of taking children like this to the Country Buffet.
Posted by Maria Carroll at 8:39 PM