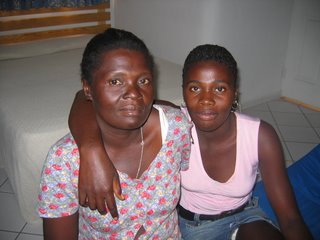 We have been the ones waiting this trip: waiting for Fastina, Katia, and Nadia to show up or otherwise contact us. Finally, they arrived separately within 24 hours of each other, a few days before we are to depart.

Fastina is a 13-year-old child who is coming to the U.S. for her second heart surgery. Much like Jackson, she had a faulty mitral valve, which was repaired in 2000, and now needs to be replaced. Fastina has been accepted by a hospital for this surgery and all the necessary letters for the visa are in Haiti. We only need to connect the papers, Fastina, and a consulate official. We had hoped this would happen before we left, but we won’t be bringing Fastina to the States until May at the earliest.

The good news is that when she and her mother showed up this morning, Fastina looked good and was in stable condition. She can’t walk too fast or too far, and as Jackson showed us, these kids can deteriorate quickly. We don’t want to delay.

Katia is a young woman who had her aortic valve replaced in 2004. We see her regularly to give her medicine. We had heard that Katia was very sick; she had lost weight and her eyes were yellow. Uh oh. We then discovered that Katia was in Jeremie, a painful 12-hour tap tap ride away, staying with her grandmother. Katia’s mom was going to get word to her that Dr. John is in Port-au-Prince.

Katia, also showed up this morning. Her mother went to Jeremie to fetch her. The crisis had passed for Katia, but what she described was not pleasant. “I felt like a fire was burning inside of me and that my head was going to fall off. I couldn’t think,” she said, highly emotional. With her low hemoglobin level, jaundice, fever, back and head pain, and lack of appetite, she described classic symptoms of malaria. Upon exam she looked healthy, her heart sounded good, and her blood pressure was normal for her. Katia had gone to Jeremie because some of the 500 Cuban doctors in the country practice in this town on the southern peninsula. However, while she was there, she never saw one of those doctors. She calmed down as John told her, “You are not crazy. You are going to live,” and we gave her a new set of medicines and a little money.

Nadia is Jackson’s 19-year-old younger sister. She came yesterday morning. There is nothing we can do for Jackson anymore, other than honor his memory. But we do have a suitcase full of things for Jackson, including pictures from his funeral, and some money to give the family.

The first thing Nadia wanted to do was see the pictures of Jackson. This was traumatic and she began crying. She had earlier wondered if Jackson was really dead, and the pictures provided evidence of this painful fact. Jackson doesn’t look much like himself in the pictures. His last days at Cleveland Clinic were rough on his spirit and his body. Through her tears, Nadia said that Jackson was the only big brother that she had and that he had had hope when Dr. John arrived in Port-au-Prince. We made arrangements to have Nadia come with a vehicle on Saturday morning; we are going to take the suitcase to her home and pay our respects to Jackson’s mother.
Posted by Maria Carroll at 4:38 PM