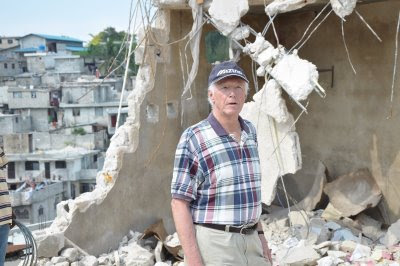 In the past year, my 77-year-old father Ed has been to Haiti twice. These have been his first trips to the island nation. Each time, my husband John has invited dad to help escort patients back to the States.
I must admit that I have been a little nervous about my dad going, mainly because if he were to have a health problem there would be little chance that he could get adequate care. But each trip has gone well.
There's really no substitute to going to Haiti for understanding the country. Hmm. . . understanding might not be the right word to use; perhaps encountering would be better. I have spent so much time in Haiti that I was interested in what a first time visitor's impressions were. Following are some comments John made about my dad's observations.
The first morning Ed looked at me, chuckled, and said, "We are surrounded by walls." Ed had surveyed the neighborhood that morning. And he was right. There were walls everywhere. The top of the walls that surround private homes in Haiti have broken glass and razor wire embedded in cement. One would really have to want to get inside the walls to run the risk of going over top. . .The formidable walls in our neighborhood in Haiti's capital startled him since he has spent most of his adult life trying to tear down walls.
Later that first morning in Haiti we piled into a pickup and traveled south and east of Port-au-Prince to an elite suburb called Petionville. We wanted to visit the site of La Promesse, the school that had collapsed suddenly one morning in early November. This tragedy had riveted the world's attention on Haiti and its courageous people. The UN soldiers in Haiti dug through the rubble. International disaster experts were flown in. Pope Benedict sent his condolences. The world seemed to care about these Haitian students and their families.
When we arrived at the site, a small contingent of UN forces from Jordan was walking up the street from the collapsed three story building. A big empty spot was apparent on the side of the street overlooking a steep ravine. About 30 Haitians were milling about on top of broken cement, rubble, and twisted rebar. Many were staring down into the ravine. Most people were quiet. . . I wondered about crushed little bodies that may lie just beneath my dirty shoes. One mother had lost 5 kids in the crush at the school named " The Promise".
Madame Telemak, a neighbor lady, standing in the debris with us, told me she heard a loud noise at 10 AM the morning the school fell. She ran over and witnessed the panic and screaming that enveloped the neighborhood. Family members and neighborhood people dug with their bare hands attempting to free anyone they could get to.
Walls of adjacent homes that had been attached to La Promesse were hanging in various states of disarray and shambles. The walls had been partially ripped off when the school collapsed and again with the process of extrication of survivors and victims. . .After a short time, there wasn't much more to see or talk about. Helpless doesn't describe the situation. A few pictures and collective shaking of heads, and it was time to leave. . . I agree with my sagacious father-in-law. Walls everywhere, not just in Haiti, need to be removed so places like La Promesse don't collapse and crush the future for all of us.
Posted by Maria Carroll at 11:32 AM

Maria--thanks for this post. We, too, are always amazed at the walls that surround almost every property. And then we go to our friends house in the neighborhood down the street from the Sisters on Delmas and are shocked at how little privacy they have and how they literally live one on top of the other. Neither is the ideal way to live.

We have 3 new people going with us in May and I'm anxious to hear their first impressions, too. I sometimes feel I talk about it so much trying to get anyone to understand what it's like but it's impossible. You have to see it and even then it's hard to believe. Once a friend came for her first time and we were walking up the stairs to the Sisters Hospital and she stopped and looked around and said "THIS is what you were talking about!!" Yes, the sights, smells and noises all make something you can't describe.

I know it's a long way away but please tell John that we will be returning to Haiti in May and would be glad to take any medicines he needs to get to his patients in PAP.

God bless you and John and the work you do. Please keep writing to this blog because we do read it! It keeps us connected when we feel so far away.

Thank you so much for your encouragement to keep writing. I really appreciate it as well as your kind comments.

I will tell John of your travel plans. I know he hopes to go to Haiti sometime in the coming months also.