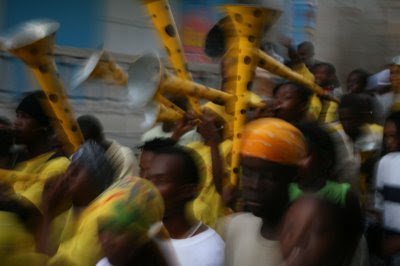 Nobody does Mardi Gras or Carnival, like Haiti. It's a whole season of partying, culminating today, in Fat Tuesday. The whole country will be one big party with many coming from the States to join in the festivities.
For Richard Morse, the owner of the fabled Hotel Oloffson and leader of the Haitian band RAM, Carnival is a busy time, with his hotel busy and the band playing all over the country. Richard posts regularly to the Corbett list and his comments are always interesting. Here's recent example that has nothing to do with Carnival
When the population eventually rises up and puts an end to Haiti's archaic economic system, controlled by the Gang of Eleven, controlled by "Friends of the Embassy", people will be screaming bloody murder. People will have forgotten how the Gang of Eleven decided to import rice and sugar, instead of producing it locally. People will forget how when the Gang of Eleven used the Haitian army to wipe out thousands of less fortunate Haitians, when their personal and economic interests were questioned. People will forget how in 2009, people couldn't get to work, children couldn't go to school, because the Gang of Eleven didn't like the lowering of the public gas price. There were no complaints about windfall profits when the price went up, but the reversal of fortune is unacceptable to the Gang of Eleven.
Despite all of our time in the country, we at Haitian Hearts have never gotten too involved in the cultural aspects of Haiti, though I find learning about the culture interesting and Carnival sounds like a lot of fun. In theory, it's the big, indulge-all-your-desires blowout before the abstinence and penance of Lent begins on Ash Wednesday. When Haiti was a predominantly Catholic nation, this was probably more the case. But even though the religious significance may have faded, the parades, parties, bands, dancing, costumes have remained. So party on!
Posted by Maria Carroll at 6:42 AM