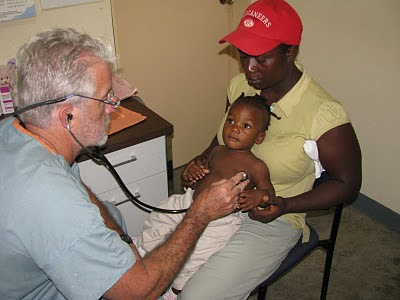 Dr. John helped a lot of children this past week, many of whom had ear infections. John said, "I think I have seen so many ear infections because people are living outside. And now it is starting to rain."

Examining children's ears can be a challenging process. Some of them look upon the otoscope as an instrument of evil. They want nothing to do with it. We had to hold one little girl down on an examining table to get a good look inside her ears. Others who aren't quite as afraid, put their shoulders up as John places the scope in their ear. He jokes, "Kids don't understand that when they put their shoulder up, it makes it hard to see in the ear. I've told them but they insist on doing it over and over."

Many children have temperatures and other symptoms that are caused by these ear infections, and so it is important to diagnose them so an antibiotic can be prescribed. We see one child's middle ear that is half-filled with puss. The babies feel much better when their ear infections are treated. And so do the moms.
Posted by Maria Carroll at 7:53 PM