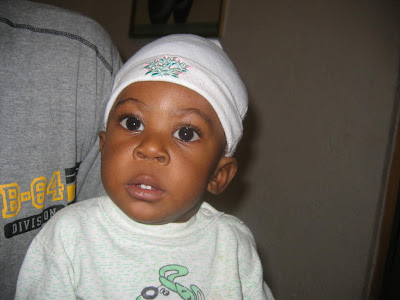 The SOS for Mauricio came in a call from Boston this past spring. “I have a friend who has a baby in Haiti with a sick heart. Can you help?” At the time, having just returned from a 7-month stay in Haiti and with a boatload of other sick kids on the list, we didn’t offer Louis, the Boston caller, much hope. John told him to tell the mom to see Dr. Pilie, a cardiologist in Port-au-Prince. John also told Louis that we didn’t have any hospitals.

Louis persisted with his calls, one of which came in June when John was in Haiti to work and escort a 24-year-old Haitian woman, Marie, to Illinois for surgery to replace two trashed out—heart valves. I told Louis if the baby and his mother could get to John in Haiti, John would examine the baby.

The next day, Mauricio and his mother arrived where John was staying. The six-month-old baby was feisty and smiling. His echocardiogram, which the mother had gotten from Dr. Pilie, indicated the baby had Tetralogy of Fallot, a congenital heart defect where five things are wrong with the heart.

John brought the echo home with him and sent it to a Midwestern medical center. After a few months, they accepted Mauricio!