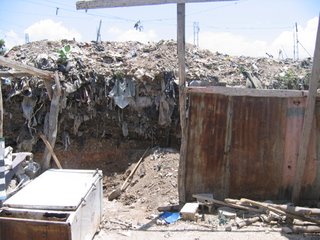 Americans who come to work in Haiti generally stay in guest houses, hotels, or private residences. For a variety of reasons, we stay at a hotel in Port-au-Prince. John negotiates a monthly rate—about $42 a night—that is cheaper than the guest houses. These establishments charge between $25 and $30 a night, per person, though this usually includes two meals a day. The downside of guesthouses is that guests share a room with other travelers, so there is no control of bedtime or noise. There is no air conditioning. Only a couple bathrooms serve the guests. In some of the guesthouses, mosquitoes are ubiquitous. It would be difficult for us to stay in these accommodations for an extended period of time and impossible for John to ensure the security of his medical equipment.

Our hotel room has a little refrigerator, air conditioning, and constant power, thanks to a generator. We have wireless in our room and our own bathroom. The bed sheets are changed every other day and the floors and bathroom are cleaned. The door locks, so our stuff is safe. It’s no four star place, more like one or two—but it’s cool, comfortable, and safe. The hotel overall is more secure than guesthouses, with a gate and a guard. U.N. forces and other armed people also dine here frequently. A couple of the owners run around with beefy-looking handguns tucked in their back pockets. People have been kidnapped outside of guesthouses and a guard was killed inside one of them. I don’t pretend to think that hotels are immune from violence, but they do seem safer and are definitely more comfortable. Our hotel has a pool—of questionable cleanliness—and an open air restaurant, where we often have breakfast and supper. With the refrig in the room, we are able to keep soda, beer, cheese—all the essentials— on hand and make at least one of our daily meals.

Despite the advantages of the hotel and its relative economy, John feels guilty about bunking here. The whole notion of staying in a hotel seems too plush to him. Until about two years ago, he lodged in guest houses. But for all the above mentioned reasons, he started patronizing hotels, first at a place on Delmas 19. Unfortunately, that part of town was becoming increasingly dangerous—we heard nearby gunfire daily—plus the hotel wasn’t well run. After the maids picked up our dirty towels, we couldn’t get new ones until the towels they picked up were washed and had dried in the sun Why the owners didn’t invest in a dryer, I don’t know, but it was emblematic of the way they treated their help. It was also difficult to understand as occupancy at the hotel was very low. Were towels really so scarce?

So about a year in half ago, we started staying in our current accommodations. This hotel is nicer than the first one we stayed in and also cheaper. Plus, it’s within walking distance of the clinic where John works and not far from the airport. We are some of their best customers, especially now, since people are staying away from Haiti due to the kidnappings. But from time to time, John will go over the math again, as if to reassure himself that staying here really is a better deal. I tell him he can just blame it on me. “I’m married now, and my high maintenance wife insists we stay in hotels.” I wouldn’t care.

In a country where obscene poverty surrounds us, it may seem petty to focus on these details. Last week, a 14-month-old baby girl John had been following, died. He escorted the hysterical mother home. She is from out of town but is staying in a slum called Cité Jeremie. From where we are staying, we could throw rocks and hit the tin roofs of this shantytown. Her accomodations were partially constructed of garbage (see above). People sleep in dirt that turns to mud when the rain comes through their leaky roofs. There is no air movements and mosquitoes swarm through the fetid shadows.

Given that these are the living arrangements of millions of Haitians, we should feel guilty about where we stay. An attorney friend of ours who is very active in social justice work at home and in Haiti occasionally stays at the same place here in Port-au-Prince. The last time we saw him here after he had eaten a good meal and gotten a good night’s sleep he commented on his need for nice accommodations, “I’m a candy ass.” We all are, compared to the poor of the world.
Posted by Maria Carroll at 4:00 PM